Because the Night V

Okay, so this has turned -- completely inadvertently, I should add -- into Patti Smith week.

So here's a sort of nostalgic closer, which I first posted about in these precincts back in 2011(!).

Consider, then, if you will, this extremely rare 1976 pamphlet edition of a poem by (then an item) Ms. Smith and Television guitarist Tom Verlaine. 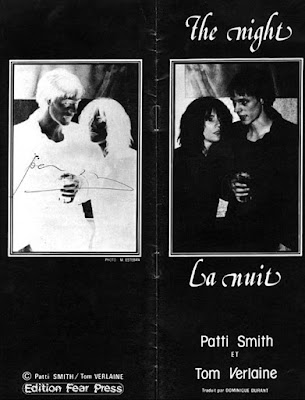 Patti was kind enough to give me an autographed copy of that during the course of the 1978 interview I did with her for the Magazine Formerly Known as Stereo Review. And years later -- some time in the early 90s -- a friend of mine, who was working with Verlaine's management, passed it along to Tom, who was equally kind enough to add his John Hancock along with handwritten notes as to which verses were his and which were Patti's.

What can I tell you -- it's one of my most treasured possessions, even if it IS pretentious enough to alternate pages in English and (presumably well-translated) French.

Have a great weekend, everybody!!!
Posted by steve simels at 8:39 AM

I remember that SR interview - Patti, the edgy New York punk-rocker/poet, stunned you at one point by revealing an admiration for Debby Boone. ("Debby Boone, The Baroness of Bland !?", you exclaimed, "Say it ain't so, Patti.") Patti then explained that she had watched Debby sing her mega-hit "You Light Up My Life" several times and was impressed by how much focus ("concentrated commitment", I believe was the phrase) Debby put in each time to delivering that song perfectly. I think it was the type of commitment Patti hoped to put into her own performances. You just never know where inspiration will come from, do ya??

This isn't about Patty Smith, but I couldn't find another way to contact you--my apologies for that. I just wanted to tell you that during your time with Stereo Review you introduced me to so many great albums and artists. It's been a long time, but I am nearly certain it was you who first brought the DBs and FireTown to my attention. There were many others along the way--especially those with jangly guitars. Back then (as it would be today!) a new SR issue with several Simels reviews was the greatest thing ever. Take care and drop the needle slowly! Your fan in San Antonio, Roger Pence

Roger...thank you for the incredibly kind words. As I always say, had I known anybody was reading me back then, I would have tried to write better.😀