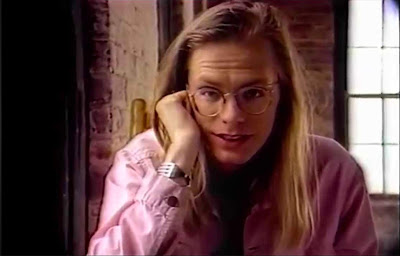 ...the brilliant auteur behind the greatest Canadian band of all time The Pursuit of Happiness...

On the off chance you don't know who Moe is, here's the review I wrote for his band's debut album (from whence that song derives) at the Magazine Formerly Known as Stereo Review back in February of 1989.

Given America's preoccupation with sex, it's ironic that our pop culture -- specifically the movies and rock-and-roll -- deals with the subject so superficially and dishonestly. Actually, rock-and-roll is particularly deficient in that regard, not very surprising when you consider how much of it is pitched at fourteen-year-old boys. Nonetheless, it's disappointing in a music that, at least theoretically, is supposed to have something to do with honesty and freedom.

That's one reason Love Junk, the debut album by a group called The Pursuit of Happiness, is such a pleasant discovery: At last, here's a band that actually has the guts to confront sex with realism, maturity, and, occasionally, wicked humor. Of course, sex isn't the only thing on their minds (growing up, another subject all too rarely dealt with in rock, is the album's second major theme), but it's refreshing to hear it sung about by someone other than the usual heavy-metal morons - which these five musicians most emphatically are not, despite a crunch-guitar attack as hard as any you've ever heard.

The band's principal weapon in their attack is singer/songwriter Moe Berg, probably the first important Moe in rock history and a guy who seems to have a remarkable grip on the muddled state of relations between the sexes as the Eighties wind down. "I'm looking for someone with a voice that's true," he declares in "Looking For Girls," "and I'm going to be nice to her - maybe she'll be nice too." A lovely sentiment, to be sure, and one I'm sure we can all relate to, but it's followed, significantly, by, "Then I'm going to do it to her four hundred and eighty-seven thousand times." Take that, Prince!

Elsewhere, Berg deals with unrequited love ("Man's Best Friend"), jealousy ("Hard to Laugh"), the joy of seeing the object of your desire in the altogether ("Beautiful White"), the destructive uses of sex as a substitute for communication ("Down on Him"), and even the difficulty of writing about relationships when you're past a certain age. "I don't write songs about girls anymore," Berg confesses on the hilariously self-revealing third track, "I'm An Adult Now." "I have to write songs about women."

The gratifying thing about Love Junk is the way the music sounds like what it means. The tunes and the band's execution of them are every bit as smart, heartfelt, and funny as Berg's corrosively sane versifying. The idiom, for want of a better term, is pop metal, all ringing guitars, aggressive drums, and angelic harmonies. Here, in the hands of people who obviously have artistic aspirations beyond growing their hair just right, the genre finds something of an apotheosis. And the cream of the jest is that a number of these songs - the wistful "She's So Young," for example - could easily be radio hits.


BTW, not only do I stand by that review, but in retrospect, I think I sort of sold the album short. Honest, it's a masterpiece.

I should add that an expanded and remastered version of it -- with bonus tracks -- came out last year. Order it over at Amazon HERE. And I mean right now.

Hits it on the head.

Love this album. Unfortunately, that's the only one I have from this bunch.

The second is good too.

TPOH made five albums in total - the first two on Chrysalis, one for Mercury and the last two for a Canadian company called Iron Music. Moe also did a solo album, called SUMMER's OVER, for Iron in 1997. They're all worth seeking out.

I saw TPOH in Toronto two months ago. They performed the entire LOVE JUNK album from start to finish, with the exception of their signature song "I'm An Adult Now", which they saved for the end of the show. They also threw in other favorites from their various albums and encored with a cover of Prince's "When Doves Cry". The band still rocks as hard as ever (their rhythm section - Dave Gilby on drums and Brad Barker on bass - is solid and really underrated) and they all seemed very gratified, especially Moe, that so many people had come out to see them and were enjoying their music enormously all these years later. Very good show.

Greatest Canadian group of all time - umm, the Guess Who?

2 categories rating what Sound Quality, recording quality ? that was so influential on a young me always @ end of the SR reviews?

That was a Best of the Month. Those didn’t have the categories.

Great tune. Is his name really Moe Berg or is it an homage to the baseball player?

Seriously, get a grip.

@Chris E I too have all five TPOH albums and Berg's solo, but I never got to see the band, something I regret, Happy BD, Moe. And that LOVE JUNK review, SS, is truly brilliant.

TPOH, to me, always begged the question, "Do listeners actually pay attention to lyrics?" A big part of Berg's genius IS his lyrics, and his band's music frames Berg's lyrics perfectly. But for those who listen but pay no attention to lyrics, TPOH might sound like thousands of other bands.

The golden hand, for me, anyway, consists of the five fingers of lyrics, hooks, melody, guitar riffs and rhythm. Four out of five is actually not bad.

Mark: The band did a few reunion gigs last year in select Canadian cities, largely to help promote and sell the LOVE JUNK 30th anniv. reissue. I don't know if there are any plans in 2019 for U.S. dates, but the band still has a web-site - check that for updates.

Steve Simels: I agree with Mark. I love your LOVE JUNK review, too, and I don't think it sells the band or the record short; I think it's an excellent summary of what makes them great.