For an Absent Friend

Okay, this is a hard one to write.

The short version: Today marks a year since the passing of my pal (and The Floor Models drummer for over four decades) Glen Robert Allen. 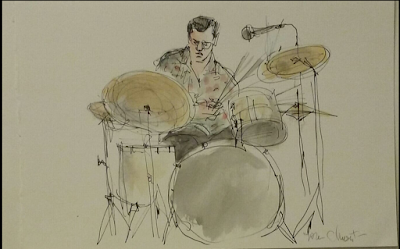 Glen enriched my life in so many ways I couldn't begin to enumerate them, but I will say that I still really haven't come to terms with the fact that he's gone. Truth is, these days when I go into the recording studio, I inevitably look to the back of the room and expect to see him sitting on the couch yelling at me about tempos.

In any event, here's a story about Glen that I haven't previously shared, for reasons that escape me, but the time is obviously right, so here goes.

Again, the short version: The hospital in NYC where Glenn was being treated toward the end had (unbeknownst to me) a musical therapy program, which I think you'll have to admit is pretty cool. And in the late summer of 2019, he wrote a song (with the woman who ran the program), and then went into the studio to record it; Glen played drums, and the rest of the track featured our friends (and frequent collaborators) Susan Hall and Ronnie D'Addario. In case you're keeping score, they're the parents of The Lemon Twigs.

I should add that I had no idea Glen had been working on the song until he played it on a boom box in his hospital room on February 7 of last year.

Here's that performance, and if you can listen to it without getting a little choked up I really don't want to know from you.

Cut to late last summer, when our friend Phil Cheesbrough (who met Glen at the Flo Mos 2019 reunion show) told me that indie rock/country singer Jenn Bostic was going to do a cover of the song with an accompanying video. This thrilled me, as you can imagine (I've written about Jenn under happier circumstances) and it also was a mitzvah for Glen's beloved wife Eddy Coston, who knew from Jenn and her work as a Christian music celebrity.

I should also add that Eddy is in the process of establishing a charitable foundation in Glen's name, and when that happens I'll be posting about it.

In the meantime, rest in peace, Glen. You made a difference to more people than you guessed.

This is a beautiful tribute Steve.

Thank you for posting. Eddy told me about Jenn's version the other day. Lit a little "yahrzeit" candle for Glennie today. We sure could use his bottomless well of humor and wit these days.

I'll have to listen to it later. I got too chocked up reading your tribute. And that last sentence was so true. R.I.P., Glen.