...in the most recent issue of the New Yorker.

Miriam Linna, who recently published a five-pound book on the history of Fortune Records, keeps her apartment teeming with jukeboxes, magazines, and records made more for love than money.

Miriam Linna met Billy Miller in 1977, while browsing at a record fair. She was looking for “You Must Be a Witch,” by the Lollipop Shoppe, a sixties garage band, and he had a copy back in his apartment. Their marriage—a celebrated meeting of the minds, ears, and shelves—lasted until Miller’s death, of cancer, in 2016. In addition to some musical collaborations (Linna, before meeting Miller, had been the founding drummer of the punk band the Cramps), they became perhaps the country’s preëminent archivists of old rockabilly and doo-wop records, among other treasures. They started the underground magazine Kicks and the Norton Records label, and Linna established a Kicks Books imprint, which published works by Sun Ra and Harlan Ellison.

At the time of Miller’s death, he had been working for more than ten years on a meticulous history of a relatively obscure Detroit label called Fortune Records. Its catalogue, catholic of genre, was a kind of Gnostic gospel of rock and roll, embodying an alternative and mostly neglected story line of rock’s disparate roots. At first, Linna was too grief-stricken to take up the project, but after a few years she and Miller’s co-author, a musician and writer named Michael Hurtt, got down to the harder-than-they’d-thought job of finishing it, with the encouragement of their editor, Marc Miller. 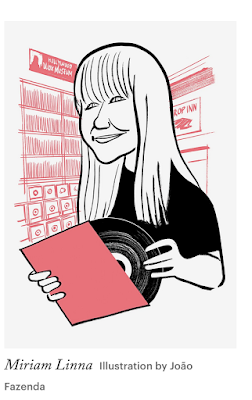 You can read the rest of it at the link OVER HERE.

For what it's worth, The Cramps were one of those bands who always struck me as more interesting in the concept rather than in the execution; that said, Norton Records was a very cool label, depending on your tolerance for loud prmitive historical noises.

Norton put out an Arch Hall, Jr. anthology, for which I'll always be grateful.

The Mighty Hannibal- Hannibalism
Del Shannon- Move It On Over

Two of my very favorite compilations, both from Norton.

I agree with your opinion of The Cramps.