It's Mike Nesmith Week: Part III -- You Could Possibly Qualify as Numero Uno

From their great 1967 album Headquarters -- on which they played and sang more or less every note, except some of the cello parts -- please enjoy The Monkees and their glorious version of Mike Nesmith's folk-rock classic "You Just May Be the One."

Monkees afficianados are doubtless aware that this song first appeared in an episode of the TV show, a version featuring The Wrecking Crew as the backup musicians; I love that one, and have since the first time I heard it, but I prefer this. In any case, you can go to YouTube and find the original.

Oh, and as I said yesterday, I have a story.

As I mentioned, in 1981 I went to a press party celebrating the release of Nesmith's Grammy-winning long form video ELEPHANT PARTS. 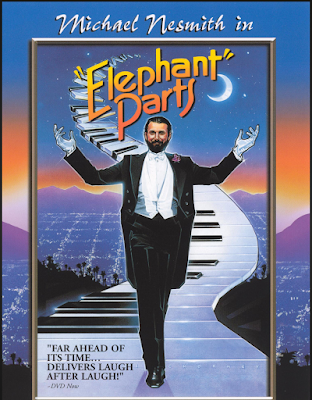 I don't specifically remember where it took place, but I seem to recall it was at some posh dive like the Plaza Hotel. Hey -- it was the early 80s; the music biz was still completely over the top.

In any case, I went up to Nez and introduced myself -- "Hi, I'm Mr. Stereo Review, blah blah blah, I'm a huge fan blah blah." He was very nice, but the word I think most precisely describes how he dealt with me is "guarded." Anyway, we shook hands, and as I turned away to head toward the free hors d'ouevres bar, I summoned the courage to say "By the way, Mr. Nesmith, I just wanted to tell you that I'm currently in a band that's doing a cover of your song "You Just May Be the One."

And he grinned from ear to ear and pumped my hand again. It was one of the major thrills of my adult life.

I should add that I can't seem to find an audio clip of The Floor Models doing the song live, but as soon as I do, I will post it.

Steve:
Do you remember that the Weasels used to do that song too? I remember doing it at Eddie’s Lounge in Teaneck, NJ.
That would presumably be before you did it with the Floor Models.
Al used to sing the lead. I don’t remember if it was he or you that brought it around to us.
Good song!

JGD: I remember Al and I fooling around with the song in his basement before the Weasels got together, but I have no memory of doing it at the legendary Eddie's Lounge gigs. Hey -- I may have ingested drugs more potent than I can imagine at this point in my life.

In the very early days of Pep In The Cat, when FD13NYC and I were still figuring out originals and covers for our first rehearsals as a trio, "You Just May Be The One" was a contender. It never got beyond the two of us working it out with his acoustic, though. Still a Top 10 Monkees track for me.

I think Neal is onto something! Maybe after The Byrds Tribute Album The Floor Models could create a Monkees tribute album. I'd love it!

Always stirring it up,

So I did look for the original and found this, for anyone looking to do it at their next karaoke party:
https://www.youtube.com/watch?v=CYJSbkLo5q8

Didn't Peter Tork used to say that, if the decision had been made for purely musical reasons, Davy Jones would have been the drummer, Tork the guitarist, Nesmith the bass-player, and Dolenz the lead singer?

Off this topic, but perhaps of interest on this blog : there's a live, streamed 'Music Celebration' for Adam Schlesinger this evening (May 5) with all sorts of awesome performers - https://rollinglivestudios.com/collections/adam-schlesinger-music-celebration-box-office

this past year, I've listened to the entire FoW set of albums multiple multiple times; enjoyed music from Ivy, his other band; watched the 'That Thing You Do!' clip on YouTube on repeat; and binged the entire wonderful run of Crazy Ex-Girlfriend. Schlesinger was amazing, so so so F**king terrible that we lost him to COVID too early.

although of course "Different Drum" can never be forgotten, the other Nesmith-written song that really sticks in my mind is "Cruisin'" - the Elephant Parts video is both funny and emotionally moving