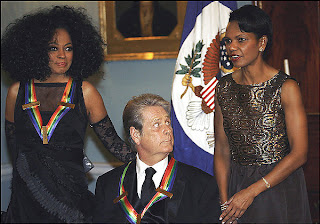 Brian Wilson was feted last night for his Kennedy Center Honors Award. The Honors gala will be broadcast Dec. 26 at 9 p.m. on CBS. Here's the run down from the WaPo:

Wilson got the final set of Honors, a tribute kicked off by a fuzzy-as-ever Art Garfunkel, who described hearing Wilson's music for the first time: "It was this unique, crazy creation: a mix of rock-and-roll and heartfelt prayer."

And, er, drugs? No, no drugs were mentioned, just as no diva antics were mentioned for Ross. This was an evening of whitewashed kindness, unadulterated gushing. (Garfunkel did say, "He is in a world of his own vibrations.") Next to fete Wilson was Lyle Lovett (Lyle Lovett?) doing a melancholic take on "God Only Knows (What I'd Be Without You)." Not your typical association with California surfin' and sunshine, but Wilson seemed touched.

And finally, a South London boys choir (a South London -- oh, ; cherubic kids are always a crowd-pleaser). "We were born a long, long way from your California beaches," said one member of Libera, "but the warmth of your music can be felt" all the way in England. They sang a harmonic and tear-jerking rendition of "Love and Mercy" -- Ross could be seen dabbing her eyes and looking toward the ceiling to prevent mascara runnage.

Then there were dozens and dozens of beach balls raining from the ceiling and batted up to the first balcony so each honoree could take one home.
No word yet as to Brian's condition after prolonged exposure to Condi Rice.
Posted by Kid Charlemagne at 1:21 PM

You just know Brian is about to ask Condi what happened to the Pips in that photo.

Oh, I'm sure Chimply will give her one on his way out the door. That's Bush family gratitude. Don't cost nothin'.