Saturday night, Thers and I met up with a bunch of our friends to go see Redd Kross play at Southpaw, in Brooklyn.

To be clear, Redd Kross are the tits. They are the shit-kickingest, hippest, goofiest, funniest, most melodic and best stage show I've ever seen. And now that they're back with the best lineup ever (Robert Hecker on guitar, and Roy McDonald on drums), they're on their game in that transcendent way most bands only dream about.

So, the show. We were there, as were many of our dear friends, and several luminaries. I'm concretely confident that the lanky redhead with the aspirational goatee was A.C. Newman, and that the fellow in the black wool coat who kept bumping me with his ass was Colin Moulding. (watertiger is skeptical of this surmise, but as I noted to Deeptoej, if Andy Partridge doesn't know where he is, why should we assume we do? And as he noted to me, there probably aren't a whole lot of people in the US who would recognize him better than I. I think I'm right about this one, seriously.) We were right next to Boston indie god John Hovorka (who used to play with a friend of ours, and yet I didn't recognize him until after). Our crowd got separated by an influx of people pushing toward the stage, but I stayed near watertiger and Brooklyn Girl much of the night.

One weird thing was this lanky drunk blonde girl who kept pushing in front of us. Now, I'm a short person, and I wanted to see this goddamn show. So when a 6'3" model in a sparkly shirt repeatedly kept trying to horn in, we got pissed. (Kudos to the young woman next to me who threatened to punch her in the uterus, but watertiger's trip was probably more effective.) Show etiquette is weird, but she clearly crossed the line.

But the show--oh the show.

The pics are from my cell, and Thers kept the setlist: (which will be inserted when he gives it to me in a form I can read--he has appalling handwriting, truly).

Redd Kross have a very very specific place in my heart--when Thers and I were just buds hanging out in grad school and I had ample reason not to flirt with him (spouse, toddler), he made me a Redd Kross tape. It was miraculous, my first awareness that there was something out there that connected with the music I had adored but had fallen away from, that punch-in-the-gut immediate connection you get sometimes. And since he was integrated into their batshit, passionate fan base, the sort of folks who collect b-sides and go to every show in the area (and one notable instance when we drove fifteen hundred miles to see them--as openers), he was the perfect person to keep lending me cassettes of their stuff. That discovery lead to the discovery of a lot of other things, and eventually to the life I'm now living, where hanging out with my best friend and listening to cool music is pretty much the rule of the day. 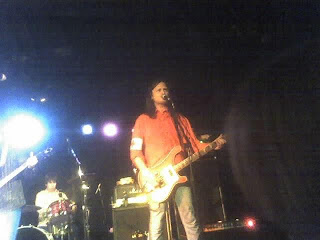 Jeff's 44 now, and Steve 40, according to Wiki, but you can't tell that from their energy levels. They bounced and danced and played the audience like a fucking drum. Barefooted Robert jerked like a Peter Garrett marionette under the control of a spastic puppeteer, but when he burst into a solo, it was impossible to watch anything else, even in his Tony Manero suit. (The others were similarly fabulously dressed, Jeff in a clover green suit with bright red shoes, Steve in a red tux shirt with a Red Cross armband, and Roy in shirt like a polka-dot purse from Target.) Stage banter included the songs Robert played for his kids (Bach, then "What a Day for a Daydream" and "Across the Universe") and frequent imprecations from Steve to make more noise (which had to be ironic). Jeff, who sweats a lot for a skinny guy, was absolutely magnetic, whether jumping in front of the monitors to connect with the crowd (I think he sweat on me), flinging picks to the cute chicks (watertiger got one, which she gave to me in a gesture of friendship so overwhelming I'm still verklempt), or simply rattling a tambourine while Robert did his thing. Two encores, including the theme from "Good Times."

So, a great night with a great band. I'm still pumped.

Well, it's about time you posted on this, you miserable slacker.
:-)

Seriously -- it sounds like a fantastic evening. I always miss the good ones.

I think I'm right about this one, seriously.

I'm still not convinced, however, that the 6'3" creature was a "she" ... that bra looked suspiciously like it was made from empty Dixie Cups ...

Kid C,
It was fabulous. And I spent the night pressed up against the back of someone who either was, or looked just like, Colin Moulding. How could it be cooler?

BTW, did they mention if they have any new product coming out soon?