And speaking as we were yesterday of rock cover versions of songs by extremely goyische 60s folkie Tom Paxton, from 1967, please enjoy L.A. Doors wannabes Clear Light and their interestingly over the top version of Tom's ode to the sinister secret forces that control our destinies, "Mr. Blue." 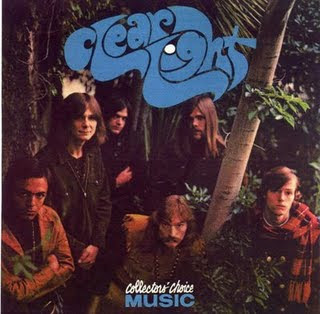 These guys were an interesting bunch, actually. They had two drummers (I think the Dead got the idea from them), one of whom was Dallas Taylor, who went on to Crosby, Ogden Nash and Mr. Stillman, or whatever the hell they were called. And the frontman was Cliff De Young, who's had quite a respectable career as a movie and TV character actor; you've seen him in a million things, including the debut episode of The X-Files, but he was particularly good as the the treacherous Justice Department guy in the fabulous 1986 thriller F/X starring Bryan Brown.

Which come to think of it was written by our old pal and funniest serious satirical rock songwriter of all time Gregory Fleeman.

But I digress. Anyway, "Mr. Blue" got a fair amount of Summer of Love airplay, at least in New York; I recall that both Rosko and Murray the K played it a lot on WOR-FM, then THE underground rock station in town. I had the LP, and I really liked the song, but as you've heard by now, it's (shall we say) portentous enough to be kind of unintentionally funny. My Jersey garage band at the time used to cover it, and I recall that our bass player got a skull on a stick from somewhere and used it as a prop a la Screamin' Jay Hawkins when he sang it. I can't remember if he put a cigarette in it like Jay used to, but it was still pretty hilarious.

And bringing it all back home, as it were, I actually interviewed singer De Young in the late 80s. Very nice guy, and he told me an amusing story about how he had gotten a job as a messenger in NYC where he'd moved after the band broke up later in '67. "So I'd be delivering packages sometimes to the offices of the Village Voice," he told me, "and there I was, dropping envelopes off in the music department, where the critics had been hailing me as the next Jim Morrison just a few months before. Hahahah!!!!"
Posted by steve simels at 12:02 AM

God, I remember that song & thinking it was, like, the hippest thing in just about the whole world. Listening to it now is sort of like watching "Easy Rider" again. The word "Yikes!" comes to mind.

Heavy, man! I'm sure this launched a thousand freakouts back in the day. Somehow Mr. De Young lacks the rich baritone of Morrison, who pulled off the air of menace in the spoken-word stuff with more panache. The more musical sections have a strong Love/ Music Machine feel.

They were produced by the late Paul Rothschild, and De Young told me some stories about him.

Let's just say that my previously held assumption that he was a real asshole was reinforced.

A trivia note: These guys can be seen (without De Young, who hadn't joined at the time) in the greatest and most hilarious paranoid flick of all time, the great THE PRESIDENT'S ANALYST, which if you haven't experienced you really need to.

You should hear some Ultimate Spinach sometime! More of the same psychedelic claptrap!

And suddenly I'm back to listening to Bob Fass on WBAI's Radio Unnamable at 2;00 a.m. That show, in NYC at least, first played Alice's Restaurant (both the original and the Multi-color Rainbow Roach versions), along with The Hawk and Mr. Bojangles (the latter live with Jerry Jeff Walker and David Bromberg) for insomniac New York audiences. clear Light's bass player (not to be confused with the obliquely referenced Weasels bassist), I believe was also the studio bassist for the Doors. If this last is incorrect, I sit corrected. I am the Weasel, koo koo ka-choo.

Hey, there's one wonderful song on this album: "Black Roses" -- I speak up for it whenever I can. It's a wonderful, driving Summer of Love single on the order of the Airplane's "Somebody to Love". ("Mr. Blue" brings the whole album to a dead halt. What a downer, even then.)