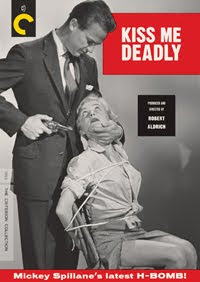 Video Event of the Week: Is Relativity's DVD of Season of the Witch, the latest piece of crap starring Nicolas Cage, by any chance what we're talking about? Might Warner Home Video's Blu-ray of Sucker Punch, the latest mishegass from 300 director Zack Snyder, conceivably be in the running? Or against all the odds and all that is good and decent in this world, might the respective CBS discs of Beastly, a remake of Beauty and the Beast featuring one of those fershlugginer Olsen twins, actually be The One(s)?

To all of these I say -- no way. There's no getting around the fact that the Event is two (count 'em, two!) new editions of adaptations of Mickey Spillane's Mike Hammer novels -- the Criterion Collection version of Robert Aldrich's Kiss Me Deadly and the no frills but still worthy MGM Limited Edition of My Gun is Quick.

Kiss Me Deadly, in case you haven't seen it, is one of the most astounding things to have emerged from the 50s, an apocalyptic film noir made by people who seem to have considered the source material absolute trash and who went out of their way to subvert it, starting with the opening credits, which run backwards. 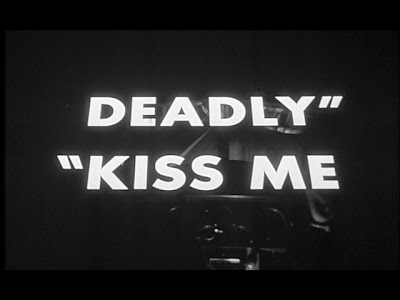 Spillane's detective hero, meanwhile, as reimagined by Aldrich and scripter A.I. Bezzerides, has no redeeming qualities whatsover; an out an out sadistic thug whose specialty is pimping his secretary out to entrap married guys and shake them down for blackmail money, he's played by Ralph Meeker with just the right note of sleazy gusto. As for the plotting, let's simply say that Spillane's original story was replaced with the wackiest cold war/horror film elements imaginable, complete with an ending that's guaranteed to make your jaw drop. Trust me: This is one very, very odd flick indeed.

Criterion's new version comes from a high-def restoration, and looks as good as you could hope (it is perhaps no secret that the film betrays a certain unconcern with conventional standards of cinematic expertise), and there are several interesting bonuses, including an excerpt from a documentary on Bezzerides and a controversial alternate finale. The accompanying booklet also features an absolutely fascinating 1955 essay on the film by Aldrich himself. 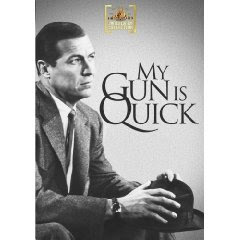 The 1957 My Gun is Quick, on the other hand, is by and large pretty faithful to Spillane's original pulp vision (although it does not seem to have occurred to anybody connected with it that the title could be read, amusingly, as an unintentional metaphor for a certain sexual dysfunction). In any case, I'd be willing to bet that Victor Saville, who exec-produced both films, was not amused by Aldrich's revisionist take on the Hammer franchise, and as a result he assigned this one to the stolid B-picture directing team of George A. White and Phil Victor. The result is a fairly conventional 50s detective flick, and newcomer Robert Bray -- not much of an actor, although he's certainly rugged enough for the part -- wears the hat and the gun convincingly. Connoisseurs of bad film scores should pay special note to Marlin Skiles' quite incongruously perky music in a very long and very pointless car chase scene, which is the only point where Quick seems to be operating in the same avant-garde universe as Deadly.

In any case, the new MGM version is in widescreen and although it hasn't been restored or remastered, looks absolutely first rate. You can order a copy over at Amazon here; Kiss Me Deadly, which is out in Blu-ray as well, can be had here.

And with that out of the way, here's a fun and obviously relevant little project to help us wile away the hours this holiday weekend:

Best or Worst Movie You'd Most Like to See Get the Criterion Collection Treatment!!!

No arbitrary rules whatsoever this time, you're welcome very much.

The greatest metaphysical end of the world movie ever. I've written about it on numerous occasions, mostly to lament the fact that there's never been a home video version in widescreen. Are you listening, Criterion?

A stylish black comedy version of the very cool fantasy pulp thriller, this was presumed lost for the longest time, but apparently a well preserved copy turned up in an archive somewhere in the last decade, and Turner Classic Movies has been threatening to air it for a couple of years. In the meantime, you can download a not so great version for free here; the print is lousy but apparently complete, with a decent stock score and legible (if poorly translated) intertitles. It's a bit of a chore to sit through in this shape, but it's watchable enough that you can imagine how great it must be under optimum conditions.

Another one I've agitated for on numerous occasions, this fabulous low budget What is Reality? sci-fi thriller (written by Twilight Zone scribe Charles Beaumont, and starring the two great Bills -- Pullman and Paxton) has never been on home video in anything other than washed out, panned and scanned prints. Why Roger Corman doesn't have somebody keeping his vault material in better shape is beyond me, but I live in hope that Criterion will somehow resurrect this one.

And speaking of Roger Corman, this no-budget spoof quickie (written by Chuck Griffith, the genius scribe of Little Shop of Horrors) is so goofy that it makes LSOHs look like War and Peace. My personal favorite amongst Corman's oeuvre, and what I wouldn't give for a video version from a pristine print.

And the Numero Uno masterpiece crying out for a really super deluxe edition, perhaps with an appreciative essay by its uber-fan Al Franken (I'm not kidding about this) clearly is....

The greatest movie ever made; I doubt a week goes by in which I don't give thanks that I was alive during the historical moment when it was conceived and produced. I should also add that when scripter Joe Esterhaz took out trade ads urging kids to cut school to attend its premiere showings, he was actually underselling the film.

Oh, and I actually do know that there's a deluxe collectors edition version of Showgirls currently available; I'm just being difficult about the fact it's not from Criterion.

Alrighty, then -- what would your choices be?
Posted by steve simels at 7:16 AM

Well, Criterion has already released some pretty strange choices -- I can't believe there's a Criterion edition of Equinox, fer cryin out loud -- so it's hard to come up with something that would be too wacky for them.

I doubt that there are pristine copies of a lot of my favorite Z movies hidden away somewhere just awaiting discovery so even the Criterion treatment wouldn't improve them but just pretending there is:

The only available copy I know of is as the 2nd feature on a budget Alpha Video disk. Their copy has some obvious meat-cleaver cuts where some gratuitous nudity has been cut. Whether a non-cut version even still exists is a mystery.

Oh,and in case you're wondering, as a hit man-thug, Lenny is hilariously awful.

When it comes to Spillane titles, I always liked "The Erection Set".

And didn't the Mick himself appear as the Hammer in an early-mid 60s movie? He also played a tough-guy author in an episode of "Columbo," with Jack Cassidy plotting his demise.

Wenders' "Until the End of the World" is relatively unavailable except on vhs. too serious for its own good, but i love the visuals and soundtrack. and we named our daughter for the lead character.

Dear Steve,
At first I wanted this forum to be about nothing but music, being that's the only thing in the world I know anything about. But the nice thing about being stupid is the opportunity it gives you to learn new things, and I'm starting to get into this film racket of yours. Thanks.

I will second the vote for Americathon (technically, isn't it Americathon: 1999?), and will throw in Used Cars.

If memory serves, the version of Bava's "Black Sunday" on DVD is brilliant. No bonuses or anything, but it's the European print, with subtitles, and in gorgeous shape.

Probably need to snag a copy, now that I think of it...

The Ghost and Mr. Chicken: In the early days of cable, the film I saw most often as a kid. Doesn't Don Knotts deserve a nod as a kind of schlock-comedy genius from the über-ironic art house set?
The 7th Voyage of Sinbad: Master animator Ray Harryhausen was another childhood hero. I'd snap up any fancy Criterion treatment of his flicks. Once upon a time there they did a laserdisc of Jason and the Argonauts, so come on, Criterion, gimme, gimme, gimme!
Speaking of animation, how about George Pal's goofy diversion, 7 Faces of Dr. Lao?
To switch gears, I'd dearly love to have a fancy treatment of Duck Soup, my favorite Marx Brothers film. "Go, and never darken my towels again!"
Criterion's selection of horror films is abysmal. Since foreign films are catnip to Criterion, how about this Hong Kong offering, The Eye--stylishly done with wonderfully creepy moments (and yes, please ignore the remake).
Finally, Orson Welles is always welcome at Criterion, and it's high time there was a decent DVD release of The Magnificent Ambersons.