Instrumental Backing Tracks of the Gods: "Lies and the Lying Liars Who Tell Them" Edition

From 1964, please enjoy the once and future Fab Four and their classic "I Feel Fine" -- the first example of feedback on a pop record? No man can say! -- sans vocals.

Sing along, won't you?

Two things in particular need to be said about this track. For starters, as you can hear below, it was inspired by a song we know to have been in John Lennon's record collection at the time -- Bobby Parker's wonderful 1961 r&b hit "Watch Your Step." 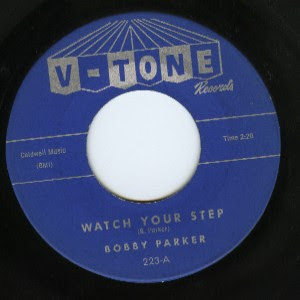 This has several layers of irony, given that Parker's record is pretty obviously inspired by Ray Charles "What I'd Say." The folk process in action, ladies and germs.

Secondly, in E-Street Band/Conan O'Brien musical director Max Weinberg's wonderful 1984 book The Big Beat -- a collection of interviews with some of the greatest rock drummers of all time -- r&b session guy extraordinaire Bernard "Pretty" Purdy claims that he overdubbed and replaced the original drum tracks on several Beatles records, including "I Feel Fine." When pressed by an incredulous Weinberg, Purdy insists that Brian Epstein brought Beatles master tapes to New York City where the overdubs were done, and that Epstein hushed the whole thing up, thus explaining why Purdie never got the credit he felt he deserved.

This is, to put it charitably, a rather dubious claim for all sorts of reasons, including the fact that the recording technology of the time would have made it extremely difficult to have achieved the substitution with the requisite level of seamlessness.

That said -- if anybody can listen to the mp3 above without concluding that the drum performance is the work of one Richard Starkey M.B.E., I have some bridgefront property in Brooklyn I'd like to discuss with you.

I never believed a word about the Purdie overdubs.

But...as both an ardent Ringo supporter and a drummer myself, I have to admit, the drumming on "I Feel Fine," with the exception of the "hhmm BOP mmmBOPmm BOP mmBOP" on the break, sounds the least like Ringo than any other Beatles track.

Purdie also claimed that there's another -- American -- guitarist dubbed on some (not all) of those same records. He of course refused to name a name....

Incidentally, I interviewed Weinberg a couple of years after the book came out and asked him about it. He didn't flat out call Purdie a liar, but you could tell the whole thing embarrassed him....

Ian McDonald's book, "Revolution In The Head" is one of most detailed and exhaustive books on The Beatles in the recording studio. This is what he says on the subject:

"Starr turns in a buoyant performance, playing Latin-style on the ride cymbal with conga accents on the tom tom. Considering it's mostly his energy that lifts the track, it's unfortunate that the production parks him far left in the stereo spectrum rather than in the middle."

Plus, I thought it was only "Love Me Do" that Purdie had claimed to be on.

I thought it was Andy White on one of the sessions for Love Me Do with Ringo on tambourine.

I was never keen on believing that hoo hah that Ringo didn't drum on some songs either. Maybe Jimmy Nicol played on some tracks.....naaaah.

- the original Love Me Do with Andy White
- Back in the USSR (it's Paul plus overdubs)
- Ballad of John & Yoko (John on guitars, Paul on everything else)

That Purdie interview always made me sad. Why would he do it? Or was he really that confused? Did he confuse playing drums for, say, The George Martin Orchestra, as the same as playing on Beatles backing tracks?

Fittingly, the same Weinberg book has a great interview with Ringo. The first time I remember him really talking drumming.

For what it's worth, I started playing the backing track & my wife commented that it reminded her of "Buckaroo," the Buck Owens instrumental that came out the year after "I Feel Fine." I knew The Beatles were influenced by Buck Owens, but maybe it went both ways.

The Vee-Jay album came out before any of this is supposed to have happened, and the drums are exactly the same as on the Capitol versions.

The whole story is nonsense....

maybe Purdie and Carol kaye should write a book together - file under "fiction". too sad for both of them.

Thanks to J. Loslo's comment above, (warning: self-promotion alert) I've posted the similarity between "Buckaroo" and "I Feel Fine" on my blog. Thanks, J.

Greed and envy are powerful emotions that can make people delusional at times.