Literary Notes From the Hood

So last night I had the great pleasure of hearing Kevin Avery, author of Everything is an Afterthought: The Life and Writings of Paul Nelson, do a reading/discussion from/of the book at a local indie book store. I raved about Everything in these precincts a few months ago, but it's finally out officially -- you can order it from Amazon over here -- and again, I can't recommend it highly enough. And no, it's not because I knew its subject professionally and am quoted, briefly, in the bio section of the book about said professional relationship.

The fact is that Paul Nelson was one of the handful of people who have scribbled about rock-and-roll over the years who might be described as a genuinely important writer, regardless of the (some would say) transience of much of his subject matter. In that regard, while re-reading Everything I was struck by how little any of it has dated; the various reviews and think pieces Avery has anthologized are as passionate, perceptive and hilarious as they seemed back in the day, and given that most of them have been out of print since forever (in fact, almost all the work collected here has never been between hardcovers) this is a major piece of cultural exhumation at the very least. I should add that some of the previously unpublished pieces are themselves worth the price of admission; my favorite is Paul's account of his tenure as a publicist and then an A&R guy at Mercury Records in the early 70s which is, perhaps, the most scabrously funny and dead-on accurate account of the inner workings of the music business as you will ever be appalled to read.

So why am I quoted in the book? Therein lies, as you might have guessed, a tale, the short version of which goes like this.

In early 1976, while toiling at the Magazine Formerly Known as Stereo Review, I was looking for somebody cool to write about Patti Smith's debut masterpiece (IMHO) Horses. I would have written it myself, but I had been contributing adulatory fanboy gush about Smith to SR for some months previously, and it occurred to me that Paul, who had done a couple of reviews for the mag over the years, would be the perfect guy for the assignment, not least of which because he was known for having been one of the earliest and most eloquent supporters of Patti's muse Bob Dylan at the time he went electric. Paul readily consented to do the piece for me; he also surprised me by saying that he really hated the record, but from my perspective that made him an even more interesting choice. In any case, the review came in a few weeks later, and it was -- not to my surprise -- absolutely brilliant (although I disagreed with almost everything in it).

Here's how it appeared in the April issue of the mag; click on it a couple of times and it should enlarge enough to be readable... 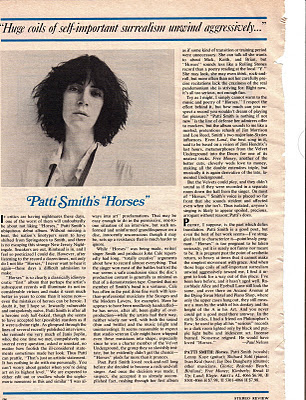 ....and this final paragraph not only sums it up, but is so fricking gorgeous that it (still) makes me furious that I'll never write anything as good.

Poetry, I suppose, is the part which defies translation. Patti Smith is a good poet, but the best of her work seems -- I've struggled hard to characterize it -- pointlessly pregnant. Horses is too pregnant to be taken seriously, yet it is surely not funny nor meant to be. It is pregnant past the point of aesthetic return, so heavy at times that it cannot make the simplest movements with grace. And when those huge coils of self-important surrealism unwind aggressively toward me, I find it urgent to look for a way out of this place. I've been here before, and it hasn't aged well. Razorblade Alley and Eyeball Lane still look the same, and over there on Arcane Avenue at the Dying Swan Motel and Piano Shop, where only the upper cases hang out, they still measure a man by the width of his donkey and the height of the A in his Art. And you never could get a good meal there anyway. In the early Sixties, I had a friend on Philosopher's Row; he used to play all his "serious" records in a dark room lighted only by black and purple light bulbs and iridescent art. Incense burned. Nonsense reigned. He would have loved Horses.

The sad postscript here -- and the reason I'm quoted in the bio -- is that a few weeks after this appeared, my boss called me into his office to inform me (angrily) that he'd learned that the review had appeared, a month earlier, in Boston's Real Paper in all but identical form; apparently Paul had no ethical problems about selling the same piece twice. Needless to say, I was embarrassed and personally disappointed. I got over it, of course, and my relations with Paul remained cordial when I would subsequently bump into him at clubs and such, but I wasn't able to use him as a reviewer after that, which I regretted a lot.

Ah well. I should add that Avery has a companion book out, a collection of previously unpublished early 80s interviews Nelson did with Clint Eastwood, which you can also order from Amazon and which is a smashing read in its own right.

I should also add that the aforementioned indie book store -- The BookCourt -- is around the corner from the Brooklyn home of a certain shady dame of my acquaintance, in what I consider, on careful reflection after lo these many years, to be the greatest neighborhood in urban America ever.

Or as I like to call it -- Cobble Hill: Where All Your Shit's in Walking Distance©.
Posted by steve simels at 12:01 AM

Yes, good read. Paul Nelson was quite a character and a far out writer. Does Sal know you copped his Hood thing?

Oh, and a little side note from my loosened unclogging brain cells. When I worked, and eventually became a junior partner at The House Of Oldies record store on Carmine Street. There was a video store called Evergreen a few doors down. Paul worked there. It might have been very late 80's or early 90's.

After work periodically, I would go in and rap with him about movies and music, and what was going on in my life. He told me about his history in the music biz and such, and I would slightly gush and say wow, that's cool, on his many musings. We had a good rapport. Like I said, he was quite a character. I'm glad I remembered that.

The story of Paul's final years, including the stint at the video store, is a very sad one and recounted with great sensitivity in the book. I'm glad he was apparently still together when you knew him....

I remember reading that in Stereo Review. It gave me permission to dislike "Horses" as much as I thought I did. And do.

I vaguely remember reading that review, too, and while I didn't agree with it, I certainly understood it -- if Patti's music didn't move you, then everything about it WAS incredibly annoying & pretentious; hell, she wore her pretensions as a badge of honor....

Anybody who truly loves Patti understands that she has, on some occasions, a very high bullshit quotient.
:-)

I agree with everything Nelson says in this review, but I still play Horses all the time after all these years. Not sure what that says about me or Patti Smith.

A certain sometime collaborator of Nelson's was also known to place the same piece with different mags simultaneously...and got blackballed from Trouser Press for doing it...and, as chance would have it, is the other rock critic (apart from Lillian Roxon) to be the subject of a biographical volume.