Wails From the Crypt (An Occasional Series)

Said it before and I'll say it again -- it continually boggles my tiny little mind that there remain very cool albums from the '60s by really cool bands that somehow I've managed to miss for all these years.

Case in point: the LP below by The Nightcaps, who are a primo example -- in Nick Tosches' immortal phrase -- of a bunch of young white punks getting down to the heart of hep. 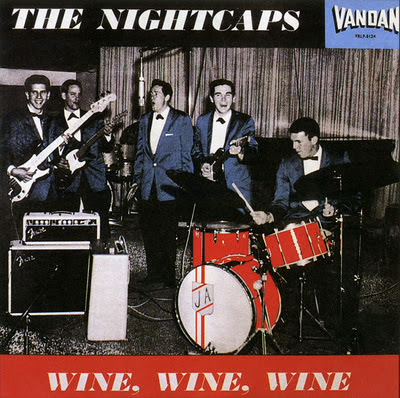 From the All-Music Guide (courtesy of my old colleague Bruce Eder):

The Nightcaps were one of those great overlooked bands of the late '50s and early '60s. By rights, they deserved the kind of recognition accorded outfits like their Texas compatriots the Bobby Fuller Four, or even Buddy Holly, but somehow they never made it to a national following. Lead singer Billy Joe Shine, rhythm guitarist Gene Haufler, lead guitarist David Swartz, bassist Mario Daboud, and drummer Jack Allday were all high school students in Dallas who started playing record hops and school dances in 1958, and also began writing songs as well. It turned out that they were good in both departments and got a lot of gigs locally. They were also noticed by a local entrepreneur named Tom Brown, who tried and failed to get them signed to RCA Victor and then put the Nightcaps out on his own local Vandan label (it sometimes seems like a quarter of the businessmen in Texas had record labels at one time or another). The Nightcaps' debut single, "Wine Wine Wine" b/w "Nightcap Rock" (the latter owing more than a little bit to "Night Train"), became a hit in Dallas and was heard enough in other parts of the country to get the band offers from locales they'd never played or even visited. When their second single, "Thunderbird" b/w "Ole Jose," released in 1960, was also a hit in Dallas, the group was prevailed upon to record a complete LP, Wine, Wine, Wine.

The Wine, Wine, Wine album was one of the best rock & roll LPs of its era, a solid mix of rockabilly, blues ("I Got My Mojo Working," "Sweet Little Angel," "Mojo Man"), and instrumental rock that still sounds good more than 40 years later. Apart from the excellence of Shine's singing and the band's musicianship -- David Swartz was a first-rate blues player, his virtuosity and feeling for the music showcased on the instrumental "Tough That's All" -- was the one major addition to their lineup, jazz saxman John Hardee, who had returned to his native Texas by then and was teaching at around the time that the Nightcaps needed a reed man. Their album never got anywhere near charting, but it was good enough to be pirated around the country and was a sufficiently impressive showcase for the Nightcaps that they were soon getting bookings across the south. The British Invasion should have doomed them, but it proved little more than a slight interruption of momentum and broke their string of steady local radio play for a short time -- the Nightcaps proved enough of a going enterprise to last right through the 1960s, past the British Invasion and through numerous lineup changes. At one point, Gary Mears of the Dallas-based Original Casuals passed through the ranks of the group.

During this period, they became a major influence on such future luminaries as Jimmie Vaughan -- who apparently learned every song off the Nightcaps' LP -- and his younger brother, Stevie Ray Vaughan, who thought "Wine, Wine, Wine" was just a great record, and ZZ Top. Vaughan would later record "Thunderbird," and ZZ Top used it to open their Fandango album. Ultimately, advancing maturity (as much a killer to a rock & roll career as drugs, alcohol, etc.), marriage, and weariness led the members into regular jobs and professions, but by all account, Billy Joe Shine was still fronting a version of the Nightcaps on weekends in the 1990s and is still a well-known musical figure in and around Dallas.

Here's their version of "Got My Mojo Working" from the aforementioned LP.

Remember -- this was three years before the Rolling Stones, Yardbirds, Butterfield Blues Band, et al, made this sort of thing fashionable.

In any case, you can download the entire album here. It's a rip from vinyl, alas, but more than serviceable.
Posted by steve simels at 12:07 AM

I downloaded the whole album & I'm listening to it now. Great stuff-- thanks.

That's superb, Stevie. Damn. The Yardbirds owe the Nightcaps more than a lot. The Shine guy is a better singer than Relf, tho.

Unsung heroes of rock n roll for sure...

the cliche of rock and roll being dead between 2/3/59 and the Beatles on Sullivan is really old. Tuff greaser bands like this were everywhere, tho mainly cutting 45s not LPs.

I suspect Levon and the Hawks (aka you know who) sounded a lot like this if you were lucky enough to see them in a club in the early 60s.

Checking with some older musician friends in Dallas.
They confirm that Nightcaps was an "Excellent R&B dance band." and "I think I used to have that album. Wine Wine Wine was a big hit on the college campus dances."