Great Lost Singles of the '90s (An Occasional Series)

From 1996 and their self-titled indie CD, please enjoy The Prostitutes and their demonically catchy ode to la vie enfer, the astounding "Down Below." 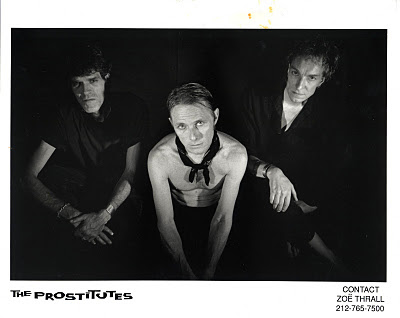 As you can hear, these guys perfected a pretty much flawless admixture of the amusingly portentous side of The Doors and the power pop smarts of The Smithereens, which is something that wouldn't have struck me as remotely feasible before I heard them. It shouldn't work, but goshdarnit it does, and brilliantly.

I should also add that they were a classic downtown New York City rock band in the great tradition of The Velvet Underground and The Heartbreakers, and speaking as somebody lucky enough to have seen them perform at several low dives over the years, I can tell you that they had charisma to burn, the hearts of bruised romantics (if you listened carefully), great songwriting chops, and -- unlike later posers like The Strokes -- an air of genuine danger about them.

In any case, I love just about everything about "Down Below" -- the snap of Jonnie Miles' drums, the cool Kinks-ish guitars, the sly Morrison-esque leer of the vocals by Frank Newberry, and the totally blueswailing harmonica that snakes its way into the mix towards the end (courtesy of guest artiste Jon Paris). The damn thing should have should have been a huge fricking hit, IMHO, and frankly, I think if it was re-released today it still could be.
Posted by steve simels at 9:23 AM

Jonnie Miles, one of the nicest guys in the world. Nice post!

Great song, and you described it perfectly.

Talk about a blast from the past... Frank Newberry had a band in suburban Philly in the late 70's called Frank Berry & The Misfits. They were absolutely great; a collision of d.i.y. punk & the 1st Rolling Stones album. I think Frank roadied for Lone Justice for awhile in the 80's. Haven't seen him since then. Where did you find this?

I've known the drummer for quite a while.....

That's the same Frank. He did roadie for Lone Justice, and many others. His brother Ben was a part of the music and was in and out of the band, Ben works for Gladys Night, now. They both worked at S.I.R . (Studio Instrument Rentals) NYC at various times. I was introduced to Frank by my neighbor, Doug Lubahn at a local bar on Broadway. Incidently, Doug played bass on The Doors albums: "Strange Days", Waiting For The Sun" and "The Soft Parade".

And thank you, Steve for such a great review - you got big ears and good taste!

Shout out to Jonnie, Frank, Ben and some love for Steve Early! klg

@ Jonnie: If you should see Frank, tell him I've still got an excellent cassette recording of The Misfits I made in '79 at the Sly Fox Inn in Ardmore Pa. The audio's a bit rough (good processing helps) but the live energy is crazy. Tell him I said Hello & Thanks for some great nights of primal rock 'n roll.

Well deserved review Jonnie! I remember so well some of the NYC dives where The Prostitutes played. So well said ... "hearts of bruised romantics .. and a genuine air of danger". Love it! love you!

Jonnie, yes, I knew him when! And now he has a rep for playin' them bad muvvas ... Didn't know he was such a frickin' ladies' man!

Noe the G aka Middle Walter

Hey Phillydog: "it was dark, I didn't know where I was parked!"

Broadway Bay, Frank lives .And Ben works for Roberta Flack as of a year ago. Both are well.

The Bay...RIP.
Rude Junkins, the spectral soul of the (Male) Prostitutes...RIP.
The 'Tutes will never die!
I still got the tour hoodie.