Well, here's an interesting curiosity. From 1964, and an album recorded on-stage at The Cavern -- yes, THAT Cavern -- in Liverpool, please enjoy Godfather of the British Blues Scene Alexis Korner, doing business with Blues Incorporated, in a live version of the venerable "Kansas City." 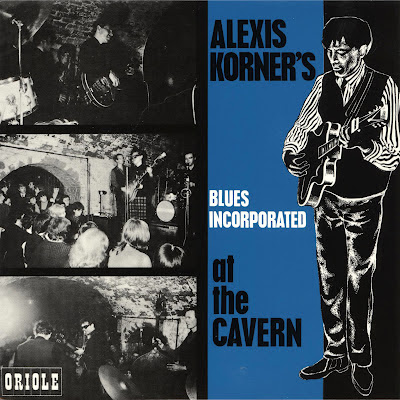 To be honest, although I obviously know Korner by reputation, the only music of his I can actually remember listening to heretofore is an amusingly actor-ish cover of "Get Off of My Cloud" he did (with Keith Richards' assistance) in 1975.

It's better than I expected.

It's actually quite nice in a jazzbo sort of way....

And I like the gruffness in his voice. His deeper register gives it a nice resonance.

I loved it, especially that swinging beat. And the singing. And that guitar solo. (He's one crazy cat, that guitarist.)

All that jazziness reminds me: when The Cavern was converted from a food storage area / wine cellar thing into a place to play music, didn't it start out as a jazz club? Or am I thinking of Mona Harrison's Jacaranda Club?

(You know, I really should read one of my Beatles biographies again so I can sound a little more erudite than I do at the moment.)

Most London bands had a rough go at Cavern gigs. Liverpool did not like London acts. The North/South divide was a big deal in those days.

From reading Spencer Liegh's "Let's Go Down To The Cavern", Alexis Korner was a rare exception to the rule; the Cavern crowd loved him and it turned out to be on of Alexis' favorite places to play. This track sounds pretty good to me...

The bass player is Danny Thompson, later of Pentangle.

Danny Thompson is the bomb.

Hey, buzzbabyjesus: Pardon my lack of lack of knowledge regarding hip 'n' happin' phrases, but what exactly does "the bomb" mean?

I'm guessing that it probably means "very good", but in what way?

Whenever I think of bombs it's not entirely pleasant. (I think of what bombs can do, and I'm not a fan of all that destruction.)

Does the phrase stem from when Tom Jones sang (in his booming baritone) about a "sex bomb"? If so, does this mean that Danny Thompson is an explosion of sex?

No, but he's one hell of a good bass player. Both for Pentangle and later with John Martyn...

I guess bomb is kind of like "the final word" or "ultimate" in this case. I could have called him a "monster", or if I was Miles Davis, "a motherfu*ker". All of which are meant to be compliments of the highest order. Anyway sorry about the confusion.

Excellent. Those cats could play.

Big fun, though the drummer ran out of ideas about 2 minutes in.

Hey, buzzbabyjesus: There's no need to apologise. I'm hopeless at keeping up with modern catchphrases, and I'm constantly baffled by fashionable words.

For example, I don't understand how "cool" and "hot" can mean the same thing. And I don't know how the words "sick" and "ill" came to mean "very good". I always thought those words meant "sick" and "ill".

Ah well. Just to add to the weirdness of it all, I'm sure all these fashionable words will eventually become unfashionable and replaced by other, equally baffling, words.