Compare and Contrast: Okay, This is Just Fricking Weird Edition

From 1957, please enjoy -- if that is the precise word -- Canadian vocal group The Diamonds and a, shall we say, idiosyncratic take on Buddy Holly's sublime proto-power pop gem "Words of Love."

The Diamonds, of course, are the group best known for "Little Darlin'," a white-boy cover of the Maurice Williams and the Zodiacs original that is one of the most exciting of all the classic 50s rock hits.

What is perhaps less well known is that these guys were jazzbo snobs who really kind of looked down on rock and r-&-b, and that their cover of "Little Darlin'" was meant as a parody. As apparently was that version of "Words of Love," which I have subsequently learned was actually released before the Holly original (they acquired the song from Holly's publisher, or so I'm told).

In any event, here are The Beatles rendering a rather more idiomatic and affectionate tribute, from Beatles For Sale, perhaps my favorite of their early LPs. 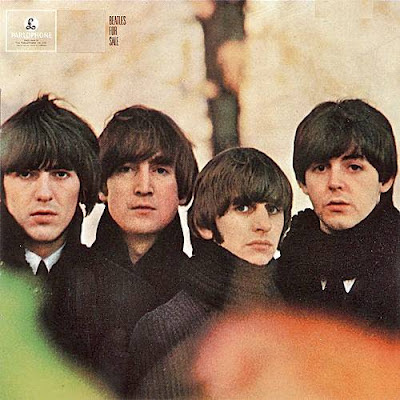 As somebody said, in the context of Steve Allen's famous recital of the lyrics to Gene Vincent's "Be-Bop-a-Lula"...

...one man's nonsense is another man's poetry.

I have always think The Diamonds' are OK until I see the smirks! They hate the music while Steve Allen has some affection for it while making fun of it. Hell, as you know from half of my responses I'm well capable of making fun of this music I love so much.

Could that be the earliest recorded version of an air guitar solo in the Diamonds video?

I actually heard that story about how the Diamonds meant "Little Darlin'" as a parody... in retrospect, gives their vocals (esp. the spoken part) a rather uncomfortable racist sheen.

On balance, I think not. Like I said, they were jazzbos. Lots of black musicians looked down on rock and r&b too.

Besides, they were Canadian. They didn't know any black people.
:-)

Is John singing both parts?

the Diamonds had in their favor the fact that no one knew the Maurice Williams version.

If you've never hears Shoes version of Words of Love, seek it out. It is my favorite version of alltime.