These Guys Were Zombies BEFORE "Pride and Prejudice and Zombies."

So after posting "A Butcher's Tale (Western Front 1914)" on Memorial Day just passed, I was frankly surprised to discover that there actually are people who didn't know the song, and -- thus, apparently -- don't know The Zombies album it derives from.

Which, of course, is the 1968 classic (1967 in England) Odessey and Oracle. Which is a masterpiece from stem to stern, and from whence "Time of the Season" also derives.

There isn't a dud cut on it, frankly, and while a lot of it is the fullest flowering of 1967 psychedelia after Sgt. Pepper -- the Zombies actually recorded it at the same Abbey Road EMI studio the Fabs used, on a lot of the same equipment (amps, et cetera) -- quite a bit of it is the purest power pop ever heard by sentient mammalian ears.

Case in point: "Friends of Mine." 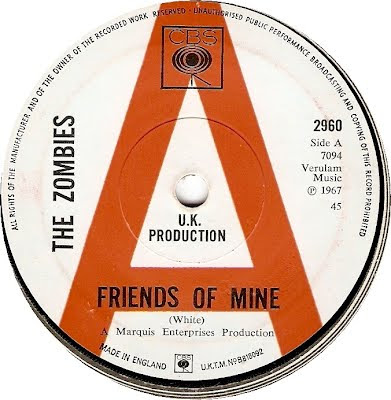 Seriously -- is there a more spine-tinglingly lovely voice in the history of rock-and-roll than Colin Blunstone? For that matter, have you ever heard a better instrumental break than the piano and guitar (god bless the late Paul Atkinson) business that slices this song in half?

In any case, if you're one of those folks who doesn't know this record, hie thee to Amazon and legally download a copy of the damn thing immediately.

I never understood why "Care of Cell 44" was not released as a follow-up single from that album (or if it was, why it tanked...)

By the time "Time of the Season" was a hit in the States, the Zombies had broken up for (if memory serves) more than a year.

Incidentally, Al Kooper deserves immortality if for no other reason than he singlehandedly convinced Columbia Records to release the Odessey and Oracle album in America.

Odessey and Oracle is a stone-cold classic. No disrespect to anyone, but how does one find this site without having heard it? Truly a touchstone for any power pop afficianado. More trivia: Odessey is mispelled on the cover because the LP artist didn't even bother to confirm the correct spelling. Afterwards, the Zombies tried to play it off as intentional.

I can't explain how I never heard this LP while considering myself a power popper...but I've placed my Amazon order. Thanks for pointing me in the right direction!

Shriner - "Care of Cell 44" was released as the LP lead-off single in the US in November of 1967 (thanks Wikipedia!). Why it did not chart is a mystery for the ages.

Apparently Al Kooper convinced Columbia/Date to release "Butcher's Tale" as a follow up single. As great as that song is - check yesterday's post here - I don't see it as top 40 material. If they had not waited until 1969 to release "Time Of The Season" as a single, perhaps the Zombies might still have been together.

I need to mention that I have known about "Odessey and Oracle" since the early 70s thanks to Mr. Simels and his magnificent review of the 2-LP Zombie retrospective that came out around 1973, including O&O in all of its glory. Steve - your influence out here in the power pop world is just massive and I want to thank you again for your insights.

Jeez -- I'd forgotten about that, both album AND review.

And just because I'm that kind of guy -- I just found a free download link for O&O for our financially straightened readers. With bonus tracks.

With this 1974 novelty, they seem to have invented "swing rock" or whatever you call the Cherry Poppin' Daddies' music from the 1990s:
http://www.youtube.com/watch?v=mais99uiAY0

They used to play frat party keggers on Friday late afternoons when I was in college on Long Island. Forget the name of the club, but it was down the road from CW Post.

I wasn't a fan then, and still not convinced all these years later, although they have a devoted cult following.

Although I always loved what head rat Pepe Marchello (sp?) said a couple of years later when they were on the CBGBs scene.

"The Ramones respect us because we can tune our guitars."
:-)

For those wishing to learn more, two excellent jumping off points are the Big Beat compilation "Zombie Heaven" and Claes Johansen's bio of the group, "Hung Up on a Dream". Both sources are very informative.

"Friends of Mine" and "Care of Cell 44" did come out in the UK prior to the band splitting up (in December 1967). Neither one did much, although Kenny Everett did have Rod and Chris on his show to try and help promote the LP. Both singles were essentially last ditch efforts to bring the band back, when it didn't work they called it a day.

When "Time of the Season" took off, The Zombies were offered quite a bit of money to play a few US dates. To their credit they said "No Thanks".

Care of Cell 44 is the song I always use as an intro to the Zombies, but I do love Brief Candles and This Will Be Our Year also. What a great album!

I was glad to see Sid n' Susie (Matthew Sweet & Susanna Hoffs) cover Care of Cell 44 on their first album.

it boggles the mind that the geniuses in the US record biz couldn't hear "Time of the Season" as a single.

"Friends of Mine" is one of my favorite Zombies' songs. I have it on a single. It was a B-side in the U.S.