Now More Than Ever!!!

Posted today for no particular reason except...oh, just because. 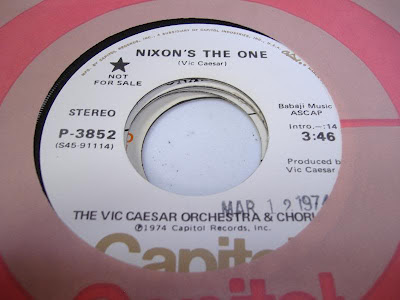 The short version is that bandleader Vic Caesar wrote and recorded that little ditty, strictly out of the goodness of his heart, for the Nixon campaign in 1968, after which it was more or less forgotten. Then, as Watergate led inexorably to the Jowled One's resignation, some wiseguy at Capitol Records remembered it and acquired the rights.

I actually had a promo 45 just like the one in the photo, which I used to play for unsuspecting friends when they dropped by my digs. Lost it at some point, but fortunately the recording re-surfaced on the soundtrack to the Clifford Irving bio-pic The Hoax in 2006.

I still think it's the most genuinely psychedelic piece of music in history, BTW.

Ah, I miss the good old days when a man was a man and a crook was not a crook.

I was one of the unsuspecting friends you ambushed with this song.

Well, at least I know how to spell his name now.

Kind of like The Fifth Dimension meets The College Republicans.

If I have this song stuck in my head all day, I will never, ever forgive you, Steve.

Sorry, by side project Mono Puff

Jeez, for a minute there I thought it was an actual cover of this. The reality is more interesting, obviously.

And wait till you hear what I'm gonna post on Monday.
:-)

Richard Milhous Nixon. They don't make 'em like they used to.

Nice, but it doesn't touch the "song poem" Nixon tune:

BTW, how appropriate is it that Nixon's way over the foul line in the Mono Puff clip?

I can't wait for it to come out on 180 gram vinyl (preferably recorded at 45rpm on just one side of course).

Oddly enough, I'm pretty sure I actually have that 45 around here somewhere. Anybody know if it's worth anything?

Put this one on along with "Spiro T. Agnew Speaks Out" and John Wayne's "America, Why I Love Her," and you've got an evening full of wholesome American Entertainment!

matthew, you could also add Mitch Miller's cover of "Give Peace A Chance".


OT, but based on a Power Pop article over at eMusic, I downloaded Paul Collins' recent album "King of Power Pop" and it kind o lives up to the title. But all you up-to-the-minute hipsters here probably knew that already.