So a fascinating cultural artifact -- of particular interest to my fellow Red Sea Pedestrians -- recently crossed my desk. Here's Peter Rainer, who I'd guess is one of them, reviewing it over at Bloomberg News.

“I lived with my mother intimately for 22 years and never saw the furniture. On every piece of furniture was a sheet to keep the dust off.”

So says Mel Brooks on the How to Be a Jewish Son episode of The David Susskind Show, originally aired in the fall of 1970 and available for the first time in its entirety on DVD from S’more Entertainment.

It’s often regarded as the funniest impromptu 90 minutes in TV history. [Including by me -- S.S.]

Brooks, who began his career as a “tummler” (sort of a combo emcee and social director) in the Catskills, was not alone on the stage, although it often seems that way. Even when he’s sitting there behaving himself, your eyes are on him.

Besides Susskind, who keeps fairly mum on the evening’s subject despite prodding, the other Jewish sons included comedian David Steinberg, fashion designer Stan Herman, Goldberg Pizzeria founder Larry Goldberg, actor George Segal (whose Where’s Poppa is the ultimate Jewish son black comedy), and Dan Greenburg, who was married to Nora Ephron and had recently written the best-seller How to Be a Jewish Mother: A Very Lovely Training Manual. [And who seems to be having a contest with Herman to see who can wear the most absolutely heinous early 70s clothes -- S.S.]

Susskind, who once professed he wanted to become “the Cecil B. DeMille of television,” clearly was unprepared for Brooks’s antics. Clipboard in hand, scrolling agitatedly down the list of prepared questions, he’s continually interrupted by Brooks’s free-associative spritzes.

“I was in analysis for six years and couldn’t say a bad word about my mother,” Brooks says when asked if he sees a psychiatrist. “I love my mother. If I could I would go skinny- dipping with her.” 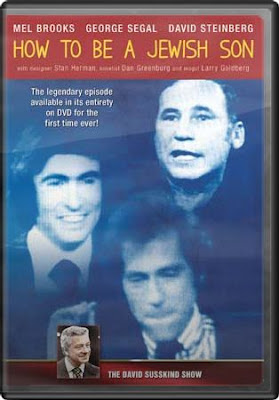 Possibly amusing postscript: My second ex-wife appeared on an episode of the Susskind show sometime in the early 80s. (Long story, but she was working as an editor at a well known woman's magazine at the time, and the show's theme was some Modern Relationships and Dating bullshit of the sort that all known woman's magazines have trafficked in since time immemorial.) In any case, while the show was being aired -- Susskind was on at 9pm Sunday nights on the pre-Fox channel 5 in the New York area -- our phone rang. My second ex-wife answered, and when the guy on the other end asked if it was in fact her -- i.e. the woman on the Susskind show at that moment -- she answered in the affirmative. At which point the guy on the other end launched into the mother of all obscene phone calls. Swear to god.

Moving right along, you can watch the whole thing for free over at Hulu -- Google it youself (what am I, your mother?) -- but don't be a shnorrer; just go to Amazon and order the DVD over here.

More to the point, as always, a coveted PowerPop No-Prize will be awarded to the first reader who gleans the significance of the Jewish Son DVD to the theme of tomorrow's Weekend Listomania.

Will it be The Obvious Missteps of David Lee Roth?

Best or worst songs by Jewish somgwriters not Bob Dylan?

Best unscripted performance by band or singer on a talk/interview/variety show?

Hideous clothes of the 70's?

As Where's Poppa was the first major studio picture to use the word "cocksucker" (and spoken by professional Hollywood hippie Rob Riener): Best use of bleepable words in a song.

The Momma's Boys of Rock?