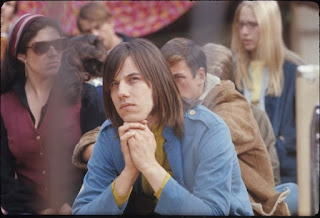 Almer -- who died at his D.C. home on January 8 (as reported in yesterday's Washington Post) -- is probably most famous for writing The Association's "Along Comes Mary," but he also co-wrote (with Brian Wilson, of course) these two, among the best things the Beach Boys did, not just in the 70s but, frankly, ever. And frankly he deserves to be immortal for both of them.

Incidentally, I'd always assumed that the Association played the instruments on their records, but at least in the case of "Mary," apparently not.

Here's the actual instrumental track in mono (from a recent deluxe reissue of the band's first album).

According to the liner notes, the players are:

A great production, obviously, but for those of you keeping score, the only member of the Association on that list is Terry Kirkman.

No argument here. Those are a couple of the Beach Boys finest, from what do you call it? Late middle period? Post "SMiLE" retreat? Pre-"Kokomo"?

Middle to late middle sounds right to me. Holland was pretty much the end of them as a creative force.

To hear the backing track to 'Along Comes Mary' is pretty amazing.

I agree about the B. Boys, these tracks were the last great ones. 'Sail on Sailor' was my theme song for many weeks on the show back in the early days. What else do you know Tandyn Almer?

Wait, what? I thought the Association were a bunch of session cats... and THEY bring in ringers?!

Thanks for posting that backing track, Steve. It's great to hear exactly what was going on behind those great vocals. The Association has long been a guilty favorite of mine.

I was puzzled by that too.

Doesn't really matter who was playing, the vocals were impeccable. Listen to Everything That Touches You, outstanding, one of my faves.

And who doesn't love "Never My Love?" It should be a mixtape standard at this point!

You like it or don't (the guilty part? "My cool friends will think I'm square!).

When the vocals start overlapping in "Every Thing That Touches You" I get goose bumps every time.

they played their instruments just fine on the song at the Monterey Pop Festival, along with highlarious intro.

The Association all played instruments when I saw them live in the mid-60s. But it wasn't uncommon for "real" bands to use session musicians (e.g., Beach Boys, Byrds) on records.

I love the two clams on the Association track. They left them in cuz it was a great take!