From the catalog of her retrospective one-woman show at London's Indica Gallery three years later:

Stairway to Abuse was a painting hung so high up on the wall that that those who wished to see it had to climb up a ladder (which was positioned directly underneath the painting). Upon climbing the ladder, one saw what appeared to be a blank canvas with a magnifying glass attached. Upon closer inspection, the canvas wasn't blank -- there was writing on it. The writing was so small, however, that it required the magnifying glass to be read. 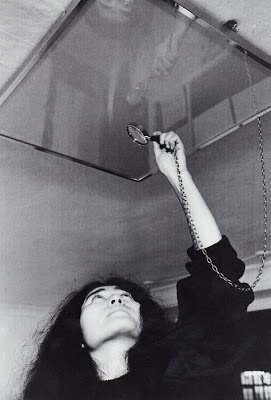 The message, when legible under the glass, was as follows:

YOU IDIOT!
You'll do anything anybody tells
you to do, won't you? You'll even
climb up a ladder in an art gallery!
Don't you have anything better to do?

No wonder John loved her.

See yesterday's comment. That's all I have to say about her.

In case anybody's wondering, this too is from Mark Shipper's "Paperback Writer."

If there was only a way I could reproduce the effect of some of his hilarious running gags without reprinting the entire book...

That must be the piece that says "Yes", that in fact caught John's eye.

There's also what Harlan Ellison said parenthetically about Ms. Ono in one of his late '60s / early '70s television review columns: "Yoko Ono (who has got to be the ugliest chick in the civilized world)..."

In either The Glass Teat or its companion, The Other Glass Teat.

when mockery is better than the thing it's mocking what does that say about the mocked?

All that really needs to be said is John's nickname for his wife: "mother".

The woman turns 80 years old next week. Is there a particular reason for making fun of her at this late stage of the game?

We've all known Yoko a pretty long time at this point and it doesn't seem that she has grown on us.

Yoko Ono: The best thing that ever happened to the crossword puzzle biz.

The best thing that ever happened to the Beatles? not so much