They Had Work Ethics in Those Days

I'd never seen this particular juxtaposition before, but it kinda takes your breath away, doesn't it.

BTW, that top picture -- which as you can see predates the official Beatles logo -- is from a TV appearance on a show called Thank Your Lucky Stars, in April of '63. 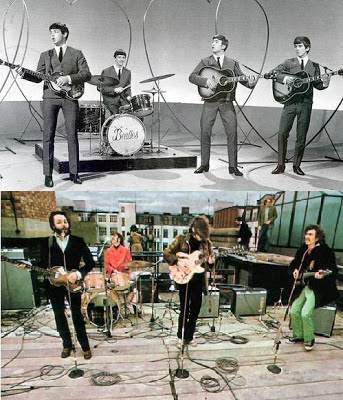 What's really mind blowing is to recall exactly what the Fabs accomplished, creatively, in the approximately six year period that separates those two shots.

But you can certainly make a case for them being the most productive rock band ever, I'll tell you that for free.

A friend of mine wants me to sing in a kind of revue that he's writing for June; all Beatles music. (I'll be a nurse at the Penny Lane Psychiatric Hospital, where he's been admitted.)
The best part is, I don't have to look at a single song, they've all been in my head my entire life. I can't say that about any other band.

Of course they're the best rock band of all time.

There, was that so hard?

While they have always been my personal favorites I know not everybody feels that way because taste is totally subjective. However, more people probably say The Fabs were their favorites than not. It doesn't bother me if you have a different first place love.

However, having lived through their rise to fame & power and all of the years since then I think it's beyond argument that they are the most important and influential rack act that ever lived. People who don't beleive that don't understand that their influence went way beyond music. The Beatles drove deep into Western culture changing music, the way males wore their hair & clothes, they affected people's views on politics, and so much more.

It was all of them that made them deeply important.

My thirteen year old daughter thinks they're Fab. She's exposed to all kinds of music around here and came to that conclusion on her own.

Charlie Ricci is totally correct, the Beatles were and are the most important musical act ever!

amen to the work ethic. Some book (Outliers maybe?) broke down their career as a club band and figured out no way, no how does any band these days work that hard.

Playing and thinking on their feet into the wee hours to drunken sailors made them the well-rounded band they were.

The only other artist I can think of that changed as much in that short period of time is David Bowie. Not that there's any other valid comparison between the two. There's The Beatles, and there's everyone else.