My Back Pages (An Occasional Series)

[Just found this piece -- which originally appeared, in more or less identical form, in the June 1990 issue of the Magazine Formerly Known as Stereo Review -- and for a variety of reasons I thought might be edifying to exhume it. Hey -- it's been a slow week. Anyway, enjoy if possible. -- S.S.]

ESQUERITA: THE LAST OF THE WEIRD?

A while back I was watching MTV (we needn't go into why) when I heard the news that Geffen Records had been sold to MCA (parent company of Universal Pictures) for a sum slightly in excess of the gross national product of several Third World countries.

Now don't get me wrong. I'm not about to launch into some weepy old Bolshie-rock-critic harangue about corporate greed and people starving in Ethiopia. As far as I'm concerned, there's absolutely no reason a (still young) former William Morris Agency mailroom worker like David Geffen shouldn't be allowed to get stinking rich in the record business. Even if that means he releases three-disc boxed sets by the late Tommy Bolin.

Still, when I heard the news I found myself muttering "Uh-oh," like Dustin Hoffman in Rain Man. Because if Geffen, the last really big independent pop label is being swallowed up by a major conglomerate, it means the record business -- worldwide -- is now controlled by only six or seven humongous companies, an unsettling turn of events if you believe the record business differs (or should differ) on some fundamental level from, say, the soft-drink business.

But back, however obliquely to MTV, itself a wholly-owned subsidiary of one of those aforementioned mega-companies. Now, there is much to be said about MTV, some of which I will say someday in another column. But this particular time, after staring at the screen, glassy eyed and sweating, for a couple of hours I came away with a fairly depressing insight -- that the Sex Pistols were right when they said there's No Future.

What brought on this epiphany? Simple: I suddenly noticed that just about nobody on MTV these days -- of any gender, in any genre, from dance pop to rap to heavy metal to college-radio rock -- seems to have the slightest shred of originality, personality, or any artistic ambition beyond getting stinking rich in a hurry.

Think I'm being overcritical? Okay, consider if you will a random example, like say Paul Abdul. Regardless of your opinion of her records, you'd be hard pressed to make a case for her as much than a Las Vegas showgirl who got lucky. Janet Jackson, anybody? C'mon -- a Disneyland animatron; you can almost see the money they spent on her dance lessons. New Kids on the Block? The Partridge Family come to ghastly contemporary life. And the list goes on and on.

Anyway, that's all an extremely roundabout way of getting to my real worry, which is, simply put, that because the vast sums of money to be made in the record business today have raised the corporate stakes so precipitously that no future performer who is not on some level a clone of an already established star is ever going to get a chance in front of the public again. Okay, okay, I'm deliberately overstating my case. But face it: It's not altogether alarmist to worry about whether the space for the emergence of a genuine against-the-grain weirdo -- the kind of misfit/genius who has fueled rock-and-roll from Buddy Holly and Elvis on down -- has been permanently foreclosed.

And so, lately, I've been thinking a lot about Esquerita, an obscure Fifties rocker whose work was recently exhumed on a remarkable Capitol CD. This was a guy who never sold many records, and judging from some of the tracks on this "Best-Of" collection, that's no particular mystery Simply put, the man was either years ahead of his time -- an impossible cross between Sun Ra and Little Richard on acid -- or else an out and out nut. Song after incredible song here finds him raging seemingly out of control, whooping in estrogenic falsetto at the most improbably moments, banging out what should be conventional rock-and-roll piano parts with so many wrong notes you have to assume they were planned, while his band -- featuring crack West Coast session cats -- abandons any attempt at keeping up with him. By all objective standards, this is preposterous, perhaps deranged stuff. And yet, and yet...weirdo or not Esquerita was onto something, and somebody was willing to give him a shot at expressing it. 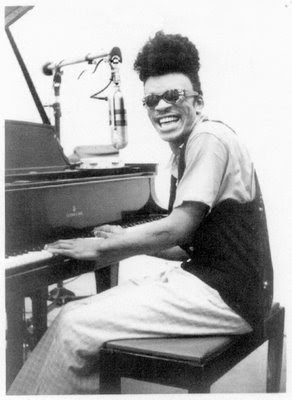 Of course, that was back in 1958, when record industry rules were still made to be broken, and I suspect that if a contemporary weirdo, an Esquerita for the Nineties, is lurking out there in the darkness, he or she is not about to land a deal with, say, Geffen Records. Stranger things, of course, have happened, like an ex-mailroom guy selling a company for half a billion dollars. But if you think this situation bodes well for the state of music in the declining years of the twentieth century...well, then its time for you to check out the ship movements in the vicinity of Fantasy Island. In the meantime, get the Esquerita CD and prepare to have your life changed. or at least your speakers.

Obviously, a lot has happened since I wrote that, and equally obviously none of my specific end of the world predictions came true in precisely the way I feared.

On the other hand, the music biz actually is now pretty much controlled by an even tinier handful of mega-companies than it was in 1990; younger readers will have to take this on faith, but the idea that RCA Victor and Columbia are now the same record label would have, with justification, been greeted by music fans of the day as a sure sign of the End Times.
Posted by steve simels at 12:13 AM

From the 1982 Catalog of Cool:
"Under the impression that if a half-maniac like Little Richard could succeed then surely a total loon would do twice as well, Capitol in the late fifties signed Esquerita. They were wrong."

I think you nailed it here:

"I suddenly noticed that just about nobody on MTV these days -- of any gender, in any genre, from dance pop to rap to heavy metal to college-radio rock -- seems to have the slightest shred of originality, personality, or any artistic ambition beyond getting stinking rich in a hurry."

Twenty-three years later, that is even more spot on. When the band onstage looks like five Starbucks baristas got lost on their way to work, the excitement, allure and, yes, danger of rock 'n' roll are all but gone. When I was younger, I looked at my fave rockers and thought, "I wanna be that guy." For today's youngsters, it must be, "Hey, I AM that guy!" And where's the fun in that?

As for the originality comment, I often receive band recommendations with this statement: You'll love 'em. They'll remind you of . Well, in that case, why not just go listen to the originals and not some half-baked pastiche? The point eludes me.

Add to that the sad fact that the music by and large sucks and you're looking at one sorry state of affairs. And get off my lawn!

I regret not buying the Esquerita promo copy I saw around the time you wrote this.

No they'll just piss me in how they don't remind me of.

Thanks for sharing the back page.

Actually, that was supposed to say "You'll love 'em. They'll remind you of (insert name of beloved band from my younger days here)" but I used angled brackets instead of parens and Blogger treated it like bad HTML. But you get the idea, anyway.

Show business has has always been about, "Get me a (name here) type!" Here in Seattle, of course, we can lay claim to "the kind of misfit/genius who has fueled rock from Buddy Holly and Elvis on down." What happens is that when that guy comes along, pretty much every other artist within earshot wants to do that, too, just like I wanted to write songs after hearing Bob Dylan, not because I wanted to be rich like Bob Dylan (although I wouldn't have minded) but because Bob Dylan invented something I wanted to be part of. Twenty years after his death Kurt Cobain still affects my students like that, the same way Elvis affected John Lennon. It's a fact that a huge corporate superstructure has grown up around that chain of inspiration, but I don't think it threatens the chain as much as it might have when you wrote the piece. The shoe that's too tight eventually wears out.

The Five Stages of an Actor's Career:

As compared to the Three Stages of An Actress' Career:

There are some lights (dim, but lights nonetheless) at the end of the tunnel:

On the music creation side: Computer technology has made it easier than ever to make a record. You can spend $1000 to buy a new Mac, and you get for free a program called GarageBand, which is a pretty-full-featured multitrack recording studio. Spend another $100-$300 (depending on features) for an audio interface, another $200-$400 for mikes, and you can have your own home studio with which you can record pretty much anything you want to play. If you sweat the details, you can make professional-quality recordings with this setup.

On the music distribution side: The Internet has made it feasible to put your recordings out there for people to find without needing a major label. Physical media (records, tapes, CDs) are dying, in favor of purely digital distribution. And the prejudices against homegrown stuff are dying, just as they are in the digital book publishing arena.

Not to say this is a panacea: you still have to work hard to write and record good stuff, and you won't have a label to do your marketing for you, but at least there are alternatives to the major labels now.

But it would still be nice if actual music-loving people with good taste were in charge of the major labels...