The Most Underrated Band Ever? (An Occasional Series)

From 1966, please enjoy The Youngbloods and the absolutely perfect mashup of Brill Building pop and folk-rock that is "All Over the World (La-La)."

As in "it's the same all over the world when you lose your girl." 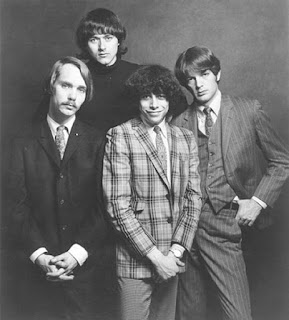 God, that's gorgeous. And who amongst us can't relate to the song's sentiment?

These guys have gotten a bad rap over the years, for a couple of reasons; the short version is that they're unfairly pegged as hippie one-hit wonders ("Get Together," which is actually a superb record that should have been a hit two years earlier than it actually was) and because the version of the band that did most of the touring in the hippie days did not include the dapper singer/songwriter of the above, Jerry Corbitt [the guy on the right in the photo]. Who was the Lennon to Jesse Colin Young's McCartney.

In any case, I can tell you from personal experience that the incarnation of the group pictured above was one of the best live rock acts ever (I would pay serious money for a high quality in-concert tape of them from back in the day, but alas, none seem to exist).

Also, too, their first two albums are among the most beautiful artifacts of their era.

They were snazzy dressers as well. Hell, I'd wear that suit Corbitt has on in a heartbeat today if I could find it.
Posted by steve simels at 12:04 AM

Once a year, my friend and I have the "I can't believe Elephant Mountain isn't on everyone's greatest albums of all time list" conversation.

I forgot -- Corbitt is on about half of that, I think. Anyone, that's the last good one they made, IMHO. But that makes three that are really terrific....

My memory was faulty -- Corbitt's not on EM, but it is still the Youngbloods mark I -- before they added that non-descript bass player and Young switched to guitar.

I saw them live when they were still billed as Jesse Colin Young and the Youngbloods and still remember the impression they made on me. They did this song, thanks for reminding me of it

I saw them in Cleveland the summer EM came out. It was the trio, with Young (my Bucks County friends still call him Perry Miller) playing bass. Great show, although I missed the harmonies. I opened for JCY in Atlanta in the '70s. He was surly but his wife (who he was later accused of beating) was nice.

I saw them at the old Cafe Au Go Go. They did the entire first album, absolutely flawlessly.

I like Mott The Hoople's cover of "Darkness, Darkness".

Darkness Darkness! another great song-- YBs had some great material.

Their recording of "Get Together" is one of those rare singles that managed to capture 3 minutes of perfection. It's still a breath of fresh air every time I hear it.