More cool togs (and other stuff) seen at the Hall of Fame last weekend.

This one, of course, needs no introduction. 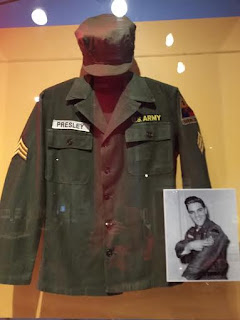 The dress below was worn by Petula Clark, presumably while singing "Downtown" somewhere. The home-made bass guitar and Hohner electric piano to its left, BTW, were used in the recording of The Zombies "She's Not There." Talk about jaw-dropping. 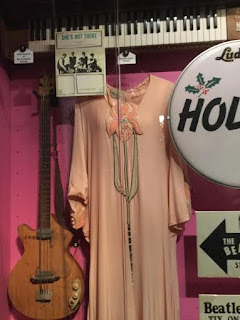 Since you'll never guess, I will note that this is a stage outfit and a pair of roller skates belonging to the late great Ritchie Valens. The amp head bottom left was the property of Duane Eddy. How cool is that? 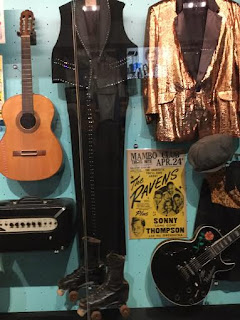 Perhaps my favorite thing in the whole museum -- Keith Richards' sweater, the one he wore on the '69 Stones tour and which can be seen in Gimme Shelter. One suspects he ripped it off from Anita's clothes closet. 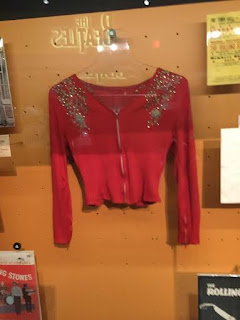 And last but not least -- when I first saw this, I thought "They let Mr. Rogers into the Hall of Fame"? 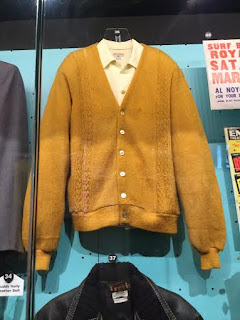 Actually it was worn by Sam Cooke, presumably in an attempt to get a piece of the lucrative Perry Como market.
Posted by steve simels at 8:55 AM

As to Keef ripping the sweater off from Anita P, wasn't this about the time he started wearing kohl under his eyes (supposedly she encouraged him to do so)?

Mark my words, they'll let Mr. Rogers before they'll ever let The Monkees in. Not that I care. Much.

if Valens had used those skates instead of a plane he'd still be with us. (pause). Lighten up, it's been 56 years!!!

We were at the RRHOF in 2006 and they didn't allow photos of the exhibits at the time. All I hav are some cheesy shots of the building itself and some stuff in the lobby. I would have loved to have taken pix of the Clash exhibit and Les Paul's original "log" electric guitar.

Chris White played a homemade bass on "She's Not There"? That is truly incredible.

Yes, now you can take photos as long as you don't use a flash.

"One suspects he ripped it off from Anita's clothes closet."

That is why I read this blog!