From the fabulous just released 3-CD compilation Surrender to the Rhythm: The London Pub Rock Scene of the Seventies... 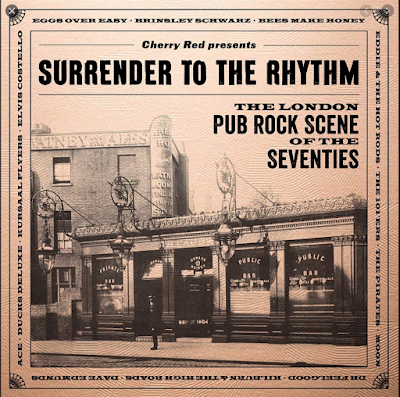 ...please enjoy American ex-pats Eggs Over Easy and their infectious attempted single (recorded in 1971 but not released until 2016) "Funky But Clean."

Throughout this week, I'll have much more to say about a) the details of said compilation; b) the historical importance of the pub rock movement; and c) several of the bands on this new anthology. But for now let's just say that Eggs Over Easy -- and I briefly played in a college garage outfit with one of the guys in EOE -- are generally acknowledged to be responsible for getting the ball rolling, pub rock wise.

I should add that EOE didn't have a full-time drummer when they recorded the above, so they enlisted the great John Steel of The Animals to pound the pagan skins on the song above.

Tomorrow: also from Surrender to the Rhythm, one of of the greatest remakes of a 60s rock classic ever made.

Oh -- and you can (and should) order the album over at Amazon HERE.

I took a look at the track list on this Cherry Red compilation. I see the great Eddie and the Hot Rods, the equally great Ducks Deluxe, but I also see Mott (I Wish I Was Your Mother, a great, great song, but pub rock?) and Elvis Costello. Huh?

But the collection does include the great single by The Fabulous Poodles, Mirror Star, and the equally great Money Is No Friend Of Mine by Starry Eyed and Laughing, so along with other comps, you takes the ones that fit in and the ones that are available.