If I Wrote This Today, I Would Be Boiled in Oil By Women Everywhere and Justifiably So (An Occasional Series)

[I did this review, for legendary rock rag CREEM, of pioneering all-gal rock band Fanny in what seems like centuries ago, but which was actually only July of 1973. Hadn't revisited it since, untill...well, it's a long story. In any case, two things strike me in retrospect. 1) Although I still think the piece is funny and that my larger point about those kids musical value remains valid, with hindsight I probably shouldn't have expressed it in quite the way I did back in the day. Also 2) I still think drummer Alice de Buhr looked great with her new haircut. Enjoy. -- S.S.] 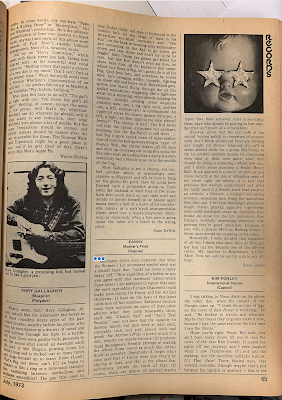 Germaine Greer once observed that what the Women's Lib movement needed most was a distaff band that "could lay down a really heavy riff." Now regardless of whether or not you agree with that statement (about which more later) I am saddened to report that only the most cant-ridden Female Chauvinist could make such claims for Fanny and her All Girl Orchestra, at least on the basis of this latest collection of hot numbers. Saddened because there were moments on some of their other albums when they came reasonably close; stuff like "Charity Ball" and "Ain't That Peculiar" may not have had the capacity to destroy minds, but they were at least solid, enjoyable rock and roll, played with real spunk. But Mother's Pride is pretty much of a dud, despite (or maybe because of) producer Todd Rundgren's feverish attempt at making the whole thing sound as much like Abbey Road as possible. Somebody (I forget who) once said that if Fanny were men they'd be playing in bars, and this is the album that definitively proves the truth of that. Of course, there are plenty of musical macho types that have achieved vinyl immortality these days who should be playing in bars also, but that ain't much of a consolation.

Anyway, given that the vast bulk of the record buying public is comprised of women (you don't think adolescent boys are shelling out dough for Donny Osmond, do ya?) it seems almost fultile for a group like Fanny to try to achieve stardom merely by competing with men at their own game; what they should be doing is inventing a whole new one, and I don't mean pursuing a Really Heavy Riff. Rock and roll is as much an attitude as a music (which, at the risk of offending some of my more right on sisters, is a fact that precious few women understand) and what we really need is a female band that projects an attitude, a lifestyle, a militant man-eating sexiness. American men being the masochists that they are, I bet four dazzlingy glamorous tough chicks playing aggressive high energy rock could absolutely clean up. Certainly they would do more for the Lib movement than Fanny's wistfully depressing obsession with proving they're good musicians. Imagine, if you will, a female MC5 or Rolling Stones. I mean, guys would be creaming in the aisles.

Meanwhile, I have decided that, regardless of all this, I think that since Alice de Buhr cut her hair, she became one of the all-time cuties. My number is Beechwood 4-5789, Alice. You can call me up for a date any old time.

You dare to use the word "spunk" in a review of Fanny?

By the way I think you were waiting for the Slits to come along.

True that, but the outrage needn't be retroactive. You shouldn't lose everything now over something you wrote 40 years ago. That way lies Huckleberry Finn.

We could go on about the Runaways, Go-Gos, Bangles, Sleater-Kinney and L7, but... your column/blog introduced me to Dea Matrona. They look like they have the potential to be the last great female rock band.

I’d be OK with you losing everything, as long as it came to me.
Especially the green Stratocaster.