From the February 1990 issue of The Magazine Formely Known as Stereo Review.

I'll betcha you had no idea this recorded artifact was even a thing. 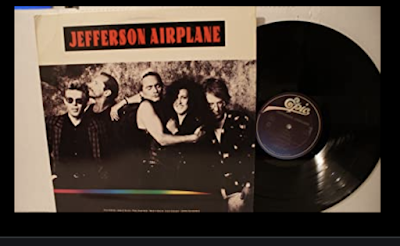 Performance: Not so hot

According to usually reliable sources, the recently reunited Jefferson Airplane gave the most interesting live concerts of any of the veteran rock acts that hit the road in 1989. Speaking as somebody who frequently saw God during late Sixties Airplane shows, that wouldn't surprise me particularly. But on the other hand, however heartening it may be to have them back, their new album is pretty lame.

Superficially, at least, these oldsters still sound like the Airplane of yore, with their signature three-lead-vocals-in-search-of-a-harmony more or less unscathed by time.

But the rest of what made the band unique and exciting -- the interplay of a thundering rhythm section, stinging psychedelic guitar riffage, and ominous twelve-string -- has been smothered here beneath a host of faceless guest musicians and a production job tailored to somebody's idea of what's acceptable for radio play at the moment.

Meanwhile, the songs and performances are in equal measure generic and mediocre: With few exceptions -- as in the self-consciously soaring occasional Jorma Kaukonnen Ice Age lead guitar lines -- they inhabit an aesthetic space somewhere between obvious throwaways and clumsy agit-prop. A major disappointment. -- S.S.

I was lucky enough to see Jorma and Jack in a very small theater in Norwalk, CT the late 80's.
I was a faux Airplane fan as Kantners Starship," Blows Against The Empire" was and still one of my favorites.

I liked a few songs on Surrealistic Pillow, and I love Turn My Life Down and a few others from Volunteers. But I have to put the Jefferson Airplane on the very top of the list of Bands That Should Have Been Great Based On Their Personnel And Potential, But Sucked Anyway. Hot Tuna did some nice work. Jefferson Starship was just embarrassing.