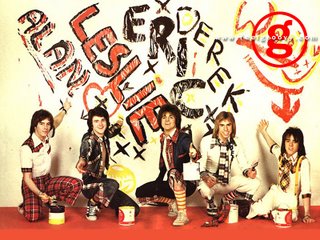 I spent a few days stewing on this article, which gave me some pause when I first read it. Though he starts with a definition of bubblegum as reactive and commercialized (perhaps technically true, but a read which ignores some of the specific generic definitions we struggle with around here), he does move on to acknowledge the ironic aspect of this particular pop. He notes its relationship to punk, though he assiduously avoids both power pop and 90's alternative pop, both of which have are clearly declensions of this movement.

And when he publishes this book "about rock-related artists who use(d) humor as a primary instrument of rebellion," Redd Kross had better get a whole chapter. I'm just sayin'....

One of the principle reasons rock proper had become more sophisticated in its humor and expression was because the baby boom kids were coming-of-age. That left the next wave of pre-pubescents without a music they could relate to or call their own. Mixing comic book ideas with nursery rhymes, baby-speak lyrics with fast, catchy dance beats, bubblegum "bands" like Ohio Express, 1910 Fruitgum Company, and the Archies took the US and UK charts by storm between 1967 and 1972. The fact that these acts did not actually exist as such, but were mere fronts for the songwriting-producer team of Jerry Kasenatz and Jeff Katz, was of little concern to the adoring masses of pre-teens. For them, the rock their elder siblings listened to was too weird and uninviting; they wanted primal simple-minded pleasures to sing along with and dance to. As such, bubblegum was not only a tacit reaction to rock snobbery, but it was also the second coming of the novelty pop that had dominated the US charts in the late '50s.
...........
Within musical ranks, one can see the early Beatles (the original boy band) as providing the initial template upon which bubblegum crafted its material ambitions. Just ask the Monkees! Even within the counter-culture's inner sanctum, one could interpret the Tiny Tim phenomenon — along with his hit "Tip-Toe Thru' the Tulips" (1968) — as much bubblegum fare as hippy absurdism.

Even within critical ranks, where the urge to burst the bubble was strongest, rock writer-rebel Lester Bangs was as tireless an advocate on behalf of the form as he had been in defense of the Girl Groups. In both cases, he admired how the pomposity and phony myths of rock bands were being penetrated and exposed, their own fakery unveiled, their own product exposed as just that — product. For Bangs, the beautiful irony was that besides the trappings, bubblegum was actually less phony and more authentic than rock proper. In their genre study, Bubblegum Music Is the Naked Truth (2001), editors Kim Cooper and David Smay actually make their dedication out to Bangs, recognizing his long-time support of this much maligned genre. Over time, Bangs's position has gathered support, just as the genre itself has become more accepted and recognized on its own terms.

There is clearly ironic humor in bubblegum co-existing in juxtaposition to high art rock in the late '60s; it provided a knowing wink and constant reminder of bottom-line realities in much the same way as Andy Warhol and other Pop and Op artists were doing within the fine arts. Furthermore, there are other aspects of gum humor that reveal (perhaps) subversive angles. Bangs has pointed to the in-house double entendres in some of the lyrics, to wordplay that shows the songwriters subverting their own "innocent" fronts. He sees sexual innuendo in both Tommy Roe's "Jam Up and Jelly Tight" (1970) and the Ohio Express 1968 hit "Yummy Yummy Yummy" ("I've got love in my tummy"). Some have also read drug references into such lines as "Pour your sweetness over me" from the Archies' "Sugar Sugar", a #1 hit on both sides of the Atlantic in 1969.
..........
Beyond glam rock, other major pop acts of the '70s, like Abba and the Bay City Rollers, also operated by the bubblegum playbook, though where the genre reached its most subversive and humorous adaptations were within the late '70s punk rock movement. The Sex Pistols' how-to-be-stars satirical satire (on album and film), The Great Rock 'n' Roll Swindle (1979), could just as easily have been addressing any bubblegum band, while the Ramones' embrace of childlike simplicity in lyrics and hooks showed the band to be studious fans of the form. As with bubblegum, the humor of punk's back-to-basics model was an implicit (and often explicit) satirical counter-reaction to the self-importance of many of the rock idols/idles of the day.

Nowadays, bubblegum continues to pop up periodically, bringing rock's higher ambitions back to pop's down-to-earth realities. One might note, for example, how modern gummers like Hanson, the Spice Girls, and Britney Spears emerged in the wake of the early '90s grunge seriousness. The bubblegum genre itself is also being increasingly praised for its primary charms and unpretentious dumb humor. As a result, alternative acts have increasingly entered the fray, embracing the form and pushing its extremities up more ironic avenues. Sweden's Sahara Hotnights and the Hives, as well as Japan's Shonen Knife and Guitar Wolf, suggest that the geographical reach of bubblegum rock is also expanding; these and other bands are currently providing some of the cutting edges of what has been termed "bubblecore", a subgenre exploring the possibilities inherent in sonic simplicity and humble (though tongue-in-cheek) humor.

So, what do you think?

(I see that the YouTube user who's posting most of these bubblegum videos is horking them from Spike at Bedazzled. I hope Spike knows that.)
Posted by NYMary at 7:25 AM

I take issue with a lot of this, but the most glaring bit is this:

"Unfortunately, Glitter's efforts to reach the gum pre-pubescent constituency later went too far when he was jailed for downloading child pornography in 1999 and more recently convicted for having sex with minors in Vietnam. One might perceive a somewhat parallel scenario in the recent legal troubles of Michael Jackson, who, lest one forgets, once led the premier soul bubblegum group of the late '60s alongside his brothers."

Linking pedophilia to bubblegum -- not cool, and not taken lightly. It's an extreme example of how this "pro-bubblegum" piece is backhandedly reaffirming the values he claims haters bring to the genre (as in, yes, I can enjoy the music "on its own terms," but if you go too far...).

How are the Beatles exempt from "material ambitions"? There are a lot of strange binaries being constructed here, early Beatles opposed to the Monkees, "serious rock" opposed to bubblegum rock, songwriting "teams" opposed to songwriter/performers, as if these are all mutually exclusive categories (and that liking bubblegum is a matter of choosing the "other" side or something).

Another question I've been asking lately: what if one were to enjoy this music without simply acknowledging irony in it (which isn't to say much of it wasn't intentionally ironic)? Could someone conceivably be moved to a reaction other than ironic appreciation by the Archies? Britney Spears? How about Paris Hilton?

Ah, Dave, I knew you'd dig this, and I was specifically thinking about your Skye/Paris concerns as I read it. This guy seems to be focused on the irony because his broader topic is humor as rebellion, I gather, but your point remains: is there an unironic stance vis-a-vis bubblegum which doesn't earn hipster scorn?