One of the things I really like about the power pop community (and yes, it is mostly a community) is that every so often you wander across a name, do some research, find out that the person you're researching has all kinds of connections to bands and performers you already know and like. It's like a constant reordering and reorganizing of elements already in play. 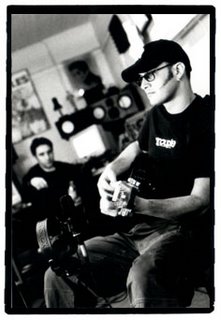 I knew this name because he, like so many others appeared on the 2000 tribute Shoe Fetish, covering the winsome "Love Is Like a Bullet," with a new arrangement and mood.

In a way, the tribute album is the perfect power pop creation, nodding as it does to history, community, and new creativity all at the same time. Thus, Carpenter's series, now on #2, SOOP (Songs of Other People). Number 1 (2001) included "Rain" and "Chimes of Freedom," plus a bunch of others. (Amazon doesn't list oiginal artists here, but Carpenter does on the discography page of his own site, to which one cannot link directly.)

An artist is the sum of those artists that he or she admires. Carpenter lays that equation out for us here, and the total is impressive indeed. The opening track, "King's Highway", a Tom Petty cover, is a tour de force. The rising, anthemic guitars, the tambourine on the choruses, the in-time cascading drums, and outstanding arrangement brought me back to the time that I first heard "American Girl." Petty has had a real career for a reason. He really is one of the great rock songwriters of our era. Carpenter recognizes this, and this song is a great tribute to Mr. Petty. He'd love this version. The second track, an obscure Beatles cover, underscores Carpenter's true understanding of what made the Beatles great. They played 1-4-5 rock-n-roll for years before they redefined the genre. They cut their teeth in the clubs, and were a great live band (when you could hear them over the screams). Like The Beatles, Carpenter plays a gig almost every night in his native Australia. There may not be a harder working musician anywhere. Playing makes you better. It worked for The Beatles; it works for Carpenter. He covers "This Will Be Our Year" by The Zombies. Jazz-pop pioneers and fathers of the prog rock movement, The Zombies wrote some of the greatest songs in an era dominated by The Beatles. Purists call them a better band. That Carpenter tries this shows his good taste. He tackles "Rain". I cringed at first, because a cover of this song is a tall order. But he nails it, and it even has that "Rain" vibe. --fufkin.com

You can hear some of the new ones at his myspace site and buy the record here.
Posted by NYMary at 8:17 AM

As an aside, I was reading an article at Slate.com and it directed me to a site that plays songs similar to bands you already like. It's pandora.com and it did a decent job finding bands I've never heard of that sound like bands I already like.

Emerson,
I dunno. Can it make my penis larger?