Well, it's Friday, and you know what that means.

Actually, in this case, it means a temporary break from snarky stories about the various vaguely disturbing things I may be doing with my Oriental manservant. In reality, I'm getting ready to join the Eschaton contingent -- and that means some of you guys, hooray!! -- in the big End the War march in DC on Saturday. So posting will be sporadic for a while, but this time for legitimate (heck, really important) reasons.

Anyway -- in my absence, here's a little diversion for you all.

Sophomore Albums That Surpassed (Artistically) The Really Good Debut Albums That Preceded Them!!!

You know the cliche -- you have your entire life to write your first album, and then you have six months to write your second, which is why a lot of followup albums disappoint. Perhaps the most obvious example is Pretenders II; an estimable work with some terrific songs, but small beer compared to the epochal first one. (More recently, think of the second Hootie and the Blowfish album, or rather, please don't think of it, as Hootie kind of sucks. Although Fairweather Johnson was a really great title...)

In any event, what do you think are the albums that best avoided the sophomore slump?

Submitted for your approval, my Top Seven would be......

6. The Beatles -- With the Beatles

2. Bruce Springsteen -- The Wild, the Innocent and the
E-Street Shuffle

and last but definitely not least.... 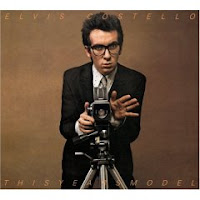 [Kudos and huzzahs to constant commenter tmink, who guessed today's theme on the basis of just one fairly innocuous (I thought) clue. Your coveted No-Prize is in the mail, pal.]
Posted by steve simels at 12:04 AM

This Year's Model was my introduction to EC, and when I finally heard My Aim Is True, it was a mild letdown. Steve, you may be in the minority of critics who fine TYM superior, but I couldn't agree more.

The Band - The Band

Either The Band's second album or TYM is likely the all-time winner in this contest.

This Year's Model is perhaps my favorite of the entries. A few others I like would be:

4. Fairport Convention - What We Did On Our Holidays


In the case of both ABB and Big Star one could argue whether the second albums actually surpassed the first but they're both damn good sophomore efforts.

I have to qualify the FC and JA lp's because both bands switched vocalists after their debut albums.

Well...you didn't say "pop albums," so it has to be "The Freewheelin' Bob Dylan."

Definitely agree re: Big Star, the Cars, and FOW. (Is there a more perfect power pop song than "Red Dragon Tattoo"? I don't think so.)

I'd also toss in The New Pornographers' The Electric Version.

(Is there a more perfect power pop song than "Red Dragon Tattoo"? I don't think so.)

You had to mention that song, didn't you? It will be stuck in my head for the next week. And no, I don't think there is a more perfect power pop song.

Sophomore efforts...I have to agree with Big Star, the Who, Costello, and FOW. I like the Cars first effort better than Candy-O, but that might be the nostalgia talkin'.

What about acts that put out a mediocre first album, then unexpectedly put out something much better for the second? They don't get any power pop love, but I'd nominate Radiohead for that one.

The fact that it opens with "I Wanna Be Your Lover" and "Why You Wanna Treat Me So Bad?" seals the deal for me.

"Bambi" and "I Feel For You" are icing on the cake.

(Rummages through collection after realizing that many worthy candidates have already been cited...)
Neil Young - Everybody Knows This Is
Nowhere
Pil - 2nd Edition
Wilco - Being There
(And I'm one of those weirdos who STILL think Marshall Crenshaw's "Field Day" a masterpiece - not to take anything away from the fine debut. - Bill Buckner

Crowded House's Temple of Low Men was a more richly textured, better produced, better written and arranged album than their debut. And the first one was great.

aw crap..somebody beat me to it.

Well, "Beaucoups of Blues' was better than "Sentimental Journey"...

Ah, the Springfield's second: I was a freshman in college and was visiting some friends who had just gotten that album, which I hadn't heard yet. They were curious about what I thought of it. They got me high, and then made me lie on the floor with a speaker on either side of my head. I couldn't move until they played the whole thing. Fortunately for me and for them, I really liked it.

Anyway, from the same era: "Strange Days" rivals "The Doors" ...

And I think it's kind of tough to talk about the Beatles, since anything they put out surpassed what came before it, with perhaps one exception.

How about Cheap Trick-In Color?

And I have incredibly good feelings for Weezer's "Pinkerton"

TMBG- Lincoln. Althoughmaybe it's more of the same.

Rush (okay, forget I said that)

I'm a bit surprised, to, that no one's mentioned Reckoning by REM.

A lotta good choices above, too, though I disagree with a few (Velvet Underground, Television).

Better than the first one?

Either The Band's second album or TYM is likely the all-time winner in this contest.

I can't believe I didn't pick The Band.

And to venture into dweeb territory for a second:

Aerosmith - Get Your Wings.

Ironically, that was the band's worst selling album in its heyday.

I just picked up a 2005 live set from the band where most of songs are from "Get Your Wings" and "Toys in the Attic".

Messrs. Whitford and Perry raise 9 kinds of hell on this one.

Many choice's I'm in total agreement with but
I'd like to wade in with a couple that I haven't seen so far.

Miranda Lambert - Crazy Ex Girlfriend
OK, I honestly can't say how good her first album (CD - whatever) was. I've heard several songs from it and I thought they were decent but this is definitely superior. Currently the album I'm having a hard time getting off my player. Gunpowder & Lead is the angriest song I've heard since The Clash's I'm Not Down.

Dave Alvin - Blue Blvd.
Romeo's Escape had some better moments but this is better as a whole

The Clash - Give 'Em Enough Rope
Probably not better that the US version of their first album but definitely better than the UK (and earlier released) version.

That's a pretty good list, but I'm here to tell you that you screwed up your Homepage URL over at Eschaton.