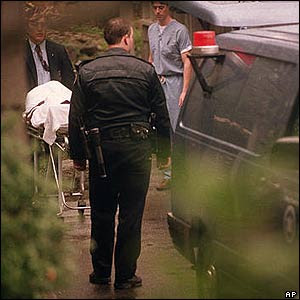 
Apparently, it's news to somebody that a life of egregious excess takes its toll.

LONDON (Reuters) - Rock stars -- notorious for their "crash and burn" lifestyles -- really are more likely than other people to die before reaching old age.
ADVERTISEMENT

A study of more than 1,000 mainly British and North American artists, spanning the era from Elvis Presley to rapper Eminem, found they were two to three times more likely to suffer a premature death than the general population.

Between 1956 and 2005 there were 100 deaths among the 1,064 musicians examined by researchers at the Centre for Public Health at Liverpool John Moores University.

More than a quarter of all the deaths were related to drugs or alcohol abuse, said the study in the Journal of Epidemial Community Health.

"The paper clearly describes a population of rock and pop stars who are at a disproportionate risk of alcohol and drug related deaths," said Mark Bellis, lead author of the study.

Huh. Bellis thinks we shouldn't listen to rock stars when they tell us not to use drugs, because they're statistically unsafe.

Americans do worse than Brits, of course.

Bellis suggested that the high death rate among older American musicians could be related to the continent's greater appetite for reunion tours, exposing the artists for more years to an unhealthy "rock'n'roll" lifestyle.

It could also be due to the poor medical outlook for impoverished American ex-pop stars who have no health insurance, he said.

Powerpop guys, FWIW, tend to be pretty long-lived, despite their ascendancy during the decadence of the 1970's. I wonder why?

Keith Richards, as always, continues to defy the statistical likelihood that he will collapse into a heap of opiated dust.

Really -- who could have suspected?