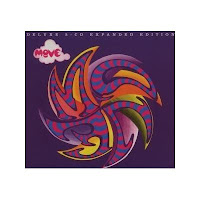 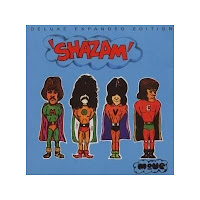 Following up on Steve's post yesterday on the legendary Move, last month Salvo Music released what appear to be the definitive reissues of two of their classic LPs Move and Shazam.
Their 1968 pop-sike masterwork Move, has been expanded to two discs which include 34 indispensible tracks that perfectly encapsulate the humor, exuberance, and fancy of swinging London circa 1968. This Move maniac's dream package includes the original mono LP, Deram A&B sides plus a bonus CD of stereo mixes from the multi-track session tapes.
Their second LP Shazam, originally released in 1970 has been given the same loving treatment with 8 bonus tracks including previously unreleased songs, original demos, and an alternate mix of the band’s only UK No.1 single, Blackberry Way. Both discs have been remastered from the original master tapes by Rob Keyloch and Rob Caiger and if you have ever heard their work with the Move's Message from the Country, you are in for a sonic treat.
Yes, I confess, I already have three previous CD editions of both of these discs, but I can't wait to get my mitts on these! You can get them here or at any purveyor of fine pop music you fancy. Cheers!
Posted by Kid Charlemagne at 5:13 PM

Man, do I need those.

But what I really need is the box set from five or six years which has an expanded version of the Live at the Marquee EP. Featuring the original five piece lineup...what an amazing band.

It had most of "Message From the Country" plus the EPs that had "Chinatown," "California Man," and "Do Ya", IIRC...