Today's Worst Person in the World!

You know, Watergate whistle blower and all around hero for our time John Dean wrote a book about the Bush administration and its defenders recently called Conservatives Without Conscience.

Well, I just read a review of a music movie that's gonna be the source material for the first chapter of the sequel I am about to write -- Conservatives Without Hearts, Souls or the Brains God Gave the Common Ice Cube.

But first, the film's trailer, for a little context.

And the now the piece in question, as posted the other day at the truly appalling website of slatternly and batshit insane rightwing blogger Debbie Schlussel:

Not knowing that there actually was a metal band from the '80s called "Anvil," when I saw this movie, I thought it had to be a parody in the vein of "This is Spinal Tap." But, sadly, it isn't. It's a documentary about losers who won't wake up and won't grow up, to the total disregard of their families.

These guys are losers. The members of the '80s band are still--in their mid-fifties--unable to face the fact that they didn't make it. And they're still pursuing their dream, even though their style of music long ago became passe. And even though their long lush locks of hair are now scraggly fragments hanging from scalps that are covered with doo-rags, apparently to hide baldness.

I hated these people, and I wanted them to fail. Robb Reiner and Steve "Lips" Kudlow are the original members of Anvil, the rock group that had one hit in the '80s, "Metal on Metal." And they just can't let go of the fact that it didn't go beyond that. At the beginning, we see disgusting shots of them from their better years: Kudlow playing a guitar with a vibrator (wow, this guy has taste) and another shot of him in complete hairy, gross frontal nudity. Yuck.During the course of this movie, we watch these idiots trudge through Europe on a tour, where they are treated like dirt and, in many cases, no-one (or barely anyone) shows up to their gigs. Still, they don't get it. They leave their families for months on end and later beg and borrow to get funding for a 13th album, which they must sell on-line and out of their cars. 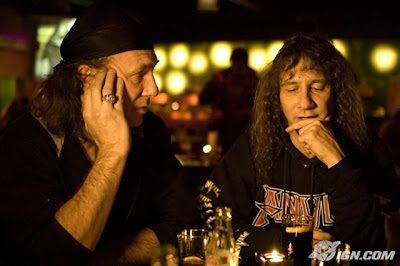 The best scene in the movie is when "Lips" Kudlow, in a bid to earn money to fund the album, works at the telemarketing firm of one of his superfans. We watch him fail miserably to telemarket sunglasses, as he unconvincingly tells someone on the phone that the sunglasses are the ones worn by Keanu Reeves in "The Matrix." Yes, even "Anvil" superfan geeks have grown up and succeeded in the real world. But not "Anvil" band members, who just can't get it together.

Most annoying part of this movie--and there are many such parts--when both Kudlow and Reiner tell us how their parents were Holocaust survivors.

They survived the camps and escaped the Nazi ovens so their kids could do this?! Hilarious. And ultimately, very sad.

While I hated these people, the documentary is a great case study in narcissistic losers who don't grow up, even at age 56. And you gotta watch it that way to enjoy it. Memo to Anvil: Get a haircut. That is, the few hairs you have left.

Okay, for just a little more context -- over at his brilliant Some Came Running blog, my old friend and colleague Glenn Kenny had this to say about the film:

Yes, band co-founders and lifelong buds Steve "Lips" Kudlow and Robb Reiner are a little rough around the edges and have their goofy moments, but they sure aren't dumb, and they've got tremendous integrity. They're genuinely heroic, albeit on a level that most moviegoers don't get to see a lot.

I hated these people, and I wanted them to fail.

God, what a wretched, emotionally stunted, totally lacking in anything resembling empathy for another human being piece of offal that woman must be. No wonder she's a wingnut....

Oh, and BTW -- that snarky crack about the Anvil guys being the kids of Holocaust survivors? I guarantee, there's a special circle in Hell guaranteed for Schlussel for that one alone. Although in her case, it'll be more like a reunion with Dad, if you know what I mean.
Posted by steve simels at 12:01 AM

I came here (past tense -- I will no longer be coming here) to hear power pop, not your PC political bullshit.

Goodbye, fuck off, and drop dead

Damn, the blog trolls have even infiltrated PowerPop.

Schlussel must be a real piece of work (I won't be going to read any of her diatribes). Apparently Anvil's struggle caused her to have a bad hair day. Obviously clueless to what makes a rocker tick. I saw a preview of the movie the other day and the band members seemed to be of amazingly good humor. Definitely on my "must see" list.

Thanks for sharing, Steve.

As a conservative (who voted for Obama) it's been really hard for me to watch a movement whose appeal was in its intellectual clarity turn into a forum for mindless resentment and cynical tub-thumping. This is what happened to the Left in the '60s and '70s and the results were devastating to our body politic, not to mention the planet, the economy, and folk music. Today Nazi lintheads are leading conservatism over an ideological cliff and that will be a tragedy because just as we needed a cogent, relevant Liberal opposition in the 80s, we're going to need a cogent, relevant Conservative opposition in the 10s. And we're not gonna get it. Pity.

Schlussel seems a little incoherent. If they've been "losers" for 20 years, wanting them to "fail" seems to be at the very least redundant. And she seems mindlessly angry at people she doesn't even know, much like anonymous above.

I saw a review of this movie in, I think, the LA Times and put it on my to-see list. Stories of people who know what they want and go out to get it are romantic, in the best, broadest, sense - even if they never get what they were looking for.

I think it looks like a great film, actually. And I don't see what's particularly political about pointing out that Schlussel (who is, after all, a wingnut blogger) is mean-spirited, nasty, and vicious here. It seems merely descriptive to me.

Well that's the point, isn't it? If you can come away from that review without thinking its author is simply one of the most meanspirited shits on the planet, you're not paying attention. It's really got nothing to do with politics.

Schlussel gave up her dreams quite early, I suspect, and resents anyone who rejects "suburban success" for something a little more radical.

Unless, of course, her dream was to be a callous, unfeeling, one-note moron.

I saw "Anvil" at a film festival earlier this year. The audience was laughing AT Robb and Lips at the start, but by the end, was cheering them on. They are heroic, just not by Debbie Schlussel's limited definition.

Schlussel gave up her dreams quite early, I suspect, and resents anyone who rejects "suburban success" for something a little more radical.I think the Divine WT hits the nail right on its flat little head here.

(And yes, that may be one of the worst sentences I've ever written, with pronouns flailing like a cat-o-nine tails.)

People sometimes simply hate that which they do not understand, and Schlussel does not seem to understand much.

I wonder how Schussel felt about "The Wrestler."

Well, okay, I don't really give a shit how she felt about it, but you get the point.

Schlussel said,
“I hated these people, and I wanted them to fail.” There has always been something about rock ‘n roll, & then dirty hippies, & then punks & metalheads – and before all that the Beats -- that makes some people absolutely psychotic. Remember Al Kapp’s visit with John & Yoko, or George Will’s column about Alan Ginsburg upon that poet’s death? It’s clearly not a purely political and certainly not an intellectual thing with those guys 'n gals; it’s more a visceral thing. Plus it seems to just tickle their funny bones to hate and insult people who would define happiness differently than they do.