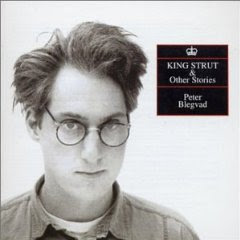 If you're not really familiar with Blegvad, you've probably nonetheless heard his thoroughly charming song "Daughter" in the version by Loudon Wainwright III on the soundtrack to Knocked Up. A super talented guy, in any case; as for "King Strut," let's just say that not only is it pretty much the best Bob Dylan record Bob never made, it's also -- to put it politely -- an unjustly unacknowledged influence on XTC's subsequent and better known "Ballad of Peter Pumpkinhead."

Not that Andy Partridge would actually rip anybody off, of course.

Oh well. In the meantime, you can -- and absolutely should -- download it HERE. As always, if the authorization has expired before you get to it, just e-mail me and blah blah blah.
Posted by steve simels at 12:31 AM

Note to self: songs by obscure avant-garde singer/songwriters and nasty remarks about XTC not as popular as one might have thought.
:-)

oh man, steve. i read about this guy awhiles back and meant to check it out. can you send me this tune? the link is all dryed out.

I'd love to hear this (email is andrew @ thenationalpep.co.uk - and thanks for mentioning it, as it reminded me of seeing Blegvad live in 1997 and how good he was then, and now I'm checking him out on Spotify.

Incidentally, Partridge produced at least one album for Blegvad, so I'm sure the influence wasn't *completely* unacknowledged...

Good grief. Blegvad and Partridge co-wrote this tune. Do your homework next time.