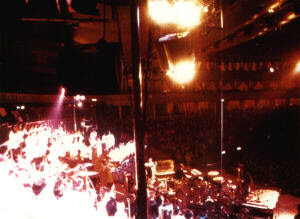 If you were around Thursday, you might recall that while setting up a video clue, from King Kong no less, for the following day's Listomania I happened to reminisce about an over-the-top concert I'd attended -- by future Chariots of Fire composer Vangelis at the Royal Albert Hall in 1975 -- that reminded me, unflatteringly, of said video.

Anyway, just to show I wasn't making this up, I did a little Googling; turns out the show was actually in February of '76, but my memory was otherwise right on the money. Here's the relevant section of the column I wrote about it at the time (for the Magazine Formerly Known as Stereo Review), complete with the original photo.

...All of which is by way of leading up to telling you the reason for my presence in the British Isles: I was being hyped. RCA, you see, has just signed Greek keyboard wizard Vangelis (that's his first name, by the way, in the grand tradition of such stars as Sabu, Hildegarde and Tonto) in an attempt to get a piece of the market now dominated by Rick Wakeman and ELP. He was making his debut at London's Royal Albert Hall, and so off we (myself, some RCA folks, and two other writers) went.

Vangelis is something of an oddball. He's been a pop star in Europe for a while as a member of a group called Aphrodite's Child. He now dismisses their work as bubblegum (and, indeed, their former lead singer Demis Roussos has gone to become a sort of farm-club Englebert Humperdinck), but he obviously has quite a fair amount of musical smarts. When I met him at his home, he sat down at the piano and ripped off a ten-minute impromptu performance that ran the gamut from Hoagy Carmichael to Meade Lux Lewis to Chopin.

His concert...well, I have to say that I've never heard or seen anything quite like it. It began with Vangelis seated at the Albert Hall pipe organ, which is immense, playing a brief and rather lovely late-Romantic style solo piece which I assumed to be by Louis Vierne or Charles-Marie Widor, but which he later assured me was strictly off the top of his head. After that he proceeded to dash around a staggering number of electronic keyboard instruments, beginning by performing a quiet duet for grand piano and Arp string synthesizer that could easily have been from an unpublished Prokofiev concerto. 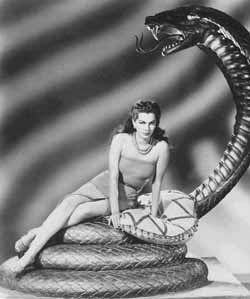 ...While all this was going on, I suddenly realized, the stage was filling up with the white-robed English Chamber Choir brandishing long red wooden sticks, twenty -- count 'em -- twenty female kettle drummers, a like number of young ladies in red skirts running circles around and banging vigorously at a collection of congas, and even, way off in back, two black guys in loincloths carrying spears and serving no musical function I could discover. By the time the piece had reached its climactic section -- a longish chant sort of thing with all involved pounding away as if possessed -- I had decided that none of Vangelis' major influences were musical at all. Obviously, the man had seen Maria Montez and Jon Hall in Cobra Woman and it had changed his life forever. I emerged from all this, as you can imagine, utterly confused. What is this guy up to, anyway?

I have nothing to add to that description, but in case you're wondering just how big a schmuck I am generally, on the Friday after the show I was outside my London hotel, hailing a cab to the airport in preparation for my return to the States, when I was accosted by a publicist I knew from another record company who asked me if I wanted an all-expenses-paid trip to Paris for the weekend to see Charles Aznavour in concert.

"Obviously, the man had seen Maria Montez and Jon Hall in Cobra Woman and it had changed his life forever." :-)

Note to self: References to obscure gay film icons not necessarily as popular as might think.
:-)

I don't know, Steve...One might have thought you'd be a bigger schmuck had you glommed onto another junket.

in case you're wondering just how big a schmuck I am generally, on the Friday after the show I was outside my London hotel

The first Sex Pistols gig to attract broader attention was as a supporting act for Eddie and the Hot Rods, a leading pub rock group, at the Marquee on 12 February 1976.