The Boys From Syracuse

From some time in the early 1980s , please enjoy pride of the Syracuse, New York music scene popsters The Tearjerkers and their delightful Beach Boys-ish ode to the (what I assume are relatively brief) summers of their home town, the aptly titled indie single "Syracuse Summer." 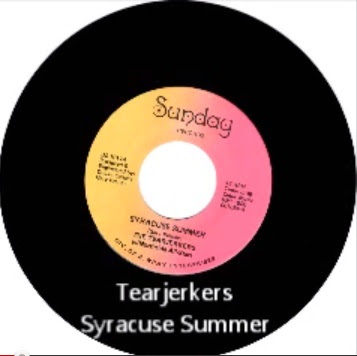 I bring this up at all -- other than for the fact that obscure regional hits are a semi-obsession around here sometimes -- because the gentleman singing lead on this one has gone on to significantly greater fame in the intervening years.

He is, of course, comedian Tom Kenny, better known as the voice and mind behind Spongebob SquarePants. I am also reliably informed that a Terjerkers roadie has also gone on to greater fame; that would be the irrepressible Bobcat Goldthwait.

I should add that when I interviewed Goldthwait in 1988 about his rock-and-roll past (for a Rolling Stone piece that ultimately never ran but for which I was nevertheless paid 5000 bucks) he did not mention these guys. He did, however tell me, that he had once been the lead singer for a Ramones-ish outfit called The Dead Ducks, and that his delivery was similar to the angsty style he later employed in his standup act.

P.S.: If you missed my turn on intertube radio last week, the show is now archived at the vault over at area24radio; scroll down to Lost at Sea and click on the link for the show for 6/12/12. I crack myself up a lot, but hopefully you'll find it amusing too. Also -- we world premier a song from the eagerly awaited new album by Shoes.

I personally saw the Tearjerkers in 79 or 80 while visiting a friend in SYR (the same guy who turned me on to The Ohms, a band previously featured on this here site).

Tom Kenny was a skinny jumping bean of a performer. I remember loving the show. This song was one of their slower ones. Most were at surf-warp speed.

I head Goldthwait on a recent episode of "Wait, Wait, Don't Tell Me." He mentioned Kenny as well.

Fun fact, I knew Bob's brother Jim. But then I live pretty close to Syracuse.

I think Mr. Goldthwait was most funny in responding to the insults thrown at him by Axl Rose. His shining moment as far as I am concerned!

I was hired by Spin (magazine), many years ago, to shoot one of their parties and happened to come across prints of Bobcat Goldthwait and others when looking through stuff, last week. Anyway, nice detective work on this post, Steve.