Weekend Listomania (Special That Voodoo You Do Audio/Video Edition)

And I say blah blah blah blah blah etc., because if you were here yesterday, you may recall that Blogger ate about two days worth of work I had meant to post, and frankly I'm not gonna waste a good joke on the chance that Its Satanic Blogesty decides to do something similar today.

So -- that being the case, and because things will almost certainly be a little quiet around here for a few days, here's a fun and hopefully rib-tickling little project to help us all beat the heat.

Best (or Worst) Post-Elvis Pop/Rock/Soul Song Referencing the Supernatural (But NOT Including God or the Devil)!!!!!

Self-explanatory, I think, and no arbitrary rules whatsoever apart from the God and Devil thing.

One of the all time great cheesy rockabilly hits. How this topped the charts in 1964, at the height of the British Invasion, remains one of history's most baffling mysteries. 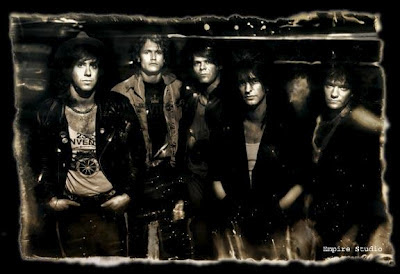 Nashville rocker Owen was responsible -- as a member of The Thieves -- for one of the great overlooked albums of the 80s (produced by no less a luminary than Marshall Crenshaw). This one -- an Owen original, not a cover of the Gene Simmons hit above -- was from their cassette-only indie follow-up record, and it just (you should pardon the expression) slays me.

Because I just discovered this clip on YouTube, and realized I was at the show where it was recorded.

Because his "Werewolves of London" would have been just too fricking obvious.

And the Numero Uno "I do believe in spooks!" song of them all simply has to be...

Because Bobby Pickett's "Monster Mash" would have been just too fricking obvious. And also because Zachacherle is my all-time hero.

Since Screamin Jay Hawkins would be too ficking obvious, I won't;>
wow just ate my list...

Zombieland: T-Bone Burnett
If I Should Fall From Grace With God: The Pogues (gets around the god glause by mentioning angels and ghosts).
The Brain That Refused to Die: The Slickee Boys
Creature From The Black Lagoon: Dave Edmunds

And, depending on how you answer the Lovin' Spoonfuls eternal question: Do You Believe In Magic, about 3000 songs with magic in their titles or bodies.

"There's a Ghost in My House," written by Holland-Dozier-Holland with token Motown white guy R. Dean Taylor, who also sang it. Later covered by the proto-syntho production group British Electric Foundation with Paul Jones on vocals. I love the cover!

Never heard of Gwil before, I need to find some of his stuff!

The first Thieves album, "Seduced by Money," is a killer, you should pardon the expression. Still available at Amazon...cheap!

"Dirty Creature" by Split Enz and "Is There A Ghost" by Band of Horses are the first that pop into my head.

"Vampire Rock" by the Fabulous Poodles.

"Why Can't I See You In My Mirror" by Tonio K. Also, "The Ballad of the Night the Clocks All Stopped" doesn't reference god by name.

"Ghosts in the Wind" by Richard Thompson.

(Don't Fear) The Reaper- BOC
Wolfman Jack- Todd Rundgren
Theme from Suspiria- Goblin
The Witch- The Sonics
"Psycko (Themes from Psycho and Vertigo)"- Laika & the Cosmonauts
I'm sure there are others, but these always put me in the right frame of mind for Halloween.
-B. Simmons

All covers of Fortune Teller are spooky.
:-)

The theme from "Ghostbusters", of course!

And I don't really like "Witchy Woman" but I feel obliged to mention it.

Maybe "Hotel California" instead? "We haven't had that spirit here since 1969..." Although I really prefer Big Daddy's inspired cover to the Eagles' original.

Hey, Anonymous: I'm afraid that Split Enz's "Dirty Creature" may have to be disqualified from this imaginary list. The "dirty creature" Tim Finn sings about is depression.

And I second the other Anonymous's* vote for Blue Öyster Cult's "(Don't Fear) The Reaper". That'd definitely be my number one.

(*Unless it's the same Anonymous.)

I can toss in a few:

And you could get sued for this...
Ray Parker Jr - Ghostbusters

How about "Season of the Witch" by Donovan?

Neutral Milk Hotel - "Ghost", off of In The Aeroplane, Over The Sea. As with everything on this album, I'm not exactly sure what he's singing about, so it's possible the ghost here isn't really supernatural.
Randy Newman - "Harps and Angels", off of the album by the same name. No direct mention of God, plus plenty of after-death supernatural, so I think it qualifies.
Creedence Clearwater Revival - "Bad Moon Rising", off of Green River. Not explicitly supernatural, but close enough.
The Pixies - "Caribou", off of Surfer Rosa. Apparently about re-incarnation. Weird & wonderful.
The Police - "Synchronicity II", off of Synchronicity. The song is the best evidence that, at least at this point in his career, Sting could still write an excellent rock song. Pretentious lyrics yes, but I think it works.
and does the soul count as supernatural? If so:
They Might Be Giants - "Birdhouse in Your Soul", off of Flood.

and finally:
The Who - "Magic Bus", off of Meaty, Beaty, Big and Bouncy. Ok, so, its not clear that the 'magic' here is of the supernatural variety, even though it does 'go like thunder'. But, come on, whatever is happening with the drums, bass and rhythm guitar here is clearly outside the bounds of explanation by modern science...

Why didn't I nominate that myself? Also "I Can See for Miles."

Aw, crap. I posted before listening all the way. The Devil gets a mention. Disqualified.