From 1966 -- and more relevantly, from Sunday night's penultimate installment of the current season of Mad Men, the one where Don more or less causes Lane to commit suicide... 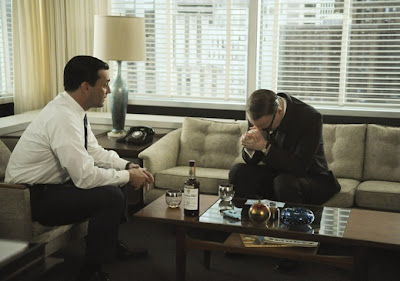 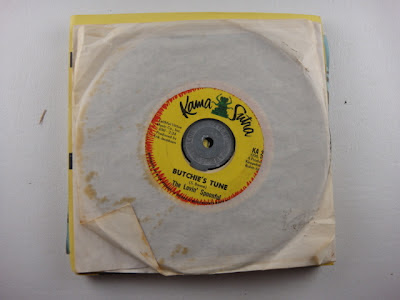 -- with the gorgeous "Butchie's Tune."

As heard in the closing montage and credits of the episode.

NYMary rightly flagged The Beatles "Tomorrow Never Knows" in an earlier episode as a seriously profound cultural signifier -- and one which cost series writer/creator Matthew Weiner a major part of his budget.

But this Spoonful song (which I assume he got for cheaper) was actually a bigger deal for me. We needn't get into the details at this point, but if you've been around here a while you already know that I've always felt the Spoonful got something of a raw deal when the history of the 60s was written (i.e., they weren't a bubblegum band, not even close).

Which is to say I feel vaguely vindicated that this song underscores perhaps the most appallingly tragic and sad plot point of the show so far.

Sounds like classic Skip Spence with Moby Grape. The guitar bits are superb. Zal Yanovsky is also the bomb.

I think we can also agree that Joe Butler is the best singer of any rock drummer who ever lived, with the possible exception of the late Levon.

Actually wasn't Don's fault about Lane. He stole from the company and couldn't be trusted, and there goes Jared Harris. I kind of knew that's what Lane was going to do. At first I thought he was going to jump out the window from his office. Amusing scene when the Jaguar wouldn't start, an expensive Dodge.

Very nice Spoonful song to close out the episode. One more to go.

Hey, Jared Harris was Moriarity in the last Sherlock Holmes movie. I make no argument for their artistic merits, but those big-action blockbusters make a buttload of money, and Moriarity is a continuing character. I'm sure Harris is doing just fine.

I once saw John Sebastian booed off a stage. Admittedly, he was opening for Rodney Dangerfield--a pairing which should have raised anyone's eyebrows--but it was still rude as hell.

Actually, I think it was Don's fault -- Lane was a very proper Brit gentleman and I think Don should have realized that suicide was the kind of thing the guy might do -- but in any case, I think Don's gonna be guilt-wracked and engage in some uncharacteristic soul searching as a result.

I tend to disagree about Draper being guilt-wracked. He has so much on his plate to begin with. Besides he gave Lane the option to resign. He could have had him arrested, and I believe Don doesn't have much of a soul to search through.

I think the theme of this season has been that Don is actually growing a soul.

Assuming I'm right, we'll see how much good it does him in the next season, I suppose.
:-)

What a cool song. It sounds kinda Byrds like. And I concur re the Spoonful, they did some lovely, breezy pop, but they were never bubblegum. Even War did some nice, breezy pop!

For about 2 years (until Zal and Steve got busted and Zally had to leave) they were our Beatles. The run of singles from "Do You Believe In Magic" through "Six O'Clock" is outstanding and the group deserves a serious biography. I for one, would like to know about why Erik Jacobson was dismissed as their producer, he was an important piece of the puzzle and their star faded once he was gone.

Trey said, "What a cool song. It sounds kinda Byrds like."

I've been trolling old issues of Billboard (via Google books), week by week. When Sebastian and co. broke big his tunes got HUGE coverage in all realms of the pop, easy listening and country and western realms.

I think that's overlooked in this day and age.

they were mentioned earlier in the season too when sally was talking to creepy glen on the phone. i think he asked her if she had heard their new single yet.

this entire season has been one of my favorites with a few nice musical surprises along the way.