From 1968, please enjoy Los Angeles heavy rock popsters People! and the album version of their cover of The Zombies' great "I Love You." 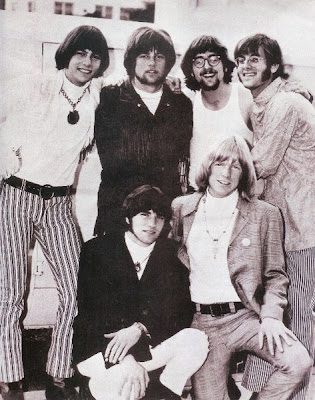 Sans all that sub-Vanilla Fudge crap at the beginning, an AM-radio-friendly edit of the above was a major hit back in the day, and deservedly so.

More importantly, the guy in the photo second from the right on the top row -- the keyboard player of the band -- is the dad of a terrific movie actor who, amongst his other credits, played a drummer in the best rock-and-roll/power pop movie of the '90s.

A coveted PowerPop No-Prize will be awarded to the first reader who guesses said actor's identity without Googling.

I Googled, so I can't say anything, except pretty cool tune.

The Zombies version is better, but yeah -- this is still a cool record.

Father of Tom Everett Scott, drummer in Tom Hanks' That Thing You Do?

Drummer for the Oneders?

Guest star crazy brother of some recurring character on ER?

Played the original drummer who breaks his arm in THAT THING YOU DO, which is how the Tom Everett Scott character gets the gig.

Another great Zombies song, is there another group that made so many great singles that completely flopped?

I'm a big Zombies fan, but the People made this song 72% better at least. I think the extended intro is cool too.

The blonde guy is Larry Norman, who was of the first wave of the Jesus Rock movement. I believe he sang "I Love you".