Fun With Mp3s (An Occasional Series): The Godfrey Daniel Experience -- Part I

I posted a song from Godfrey Daniel's Take a Sad Song last week, but since I love all you guys more than food, and because the album is (at the moment) sadly unavailable -- which I consider a genuine cultural tragedy -- I have decided to put the entire thing up in four consecutive installments. 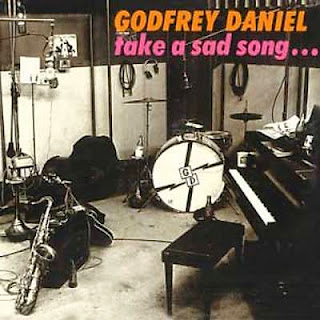 In case you missed last week's column, here's the short version. The album was released, on Atlantic Records, in early 1972, and it came with no band photo or musical credits other than that it was produced and arranged by Dave Palmer and Andy Solomon (neither of whom were known to me). A quick listen, however, made the album's conceptual genius immediately apparent -- what Palmer and Solomon were doing was taking then contemporary (late 60s, early 70s) pop and rock staples and reinterpreting them in, shall we say, other earlier styles. This was an incredibly radical and audacious thing to do in 1972, but more important the album worked equally well both as pastiche and affectionate homage, and the aural evocations of the earlier eras (from 40s jump blues to early rock to Del Shannon and the early 60s) were done with almost eerie authenticity.

Plus, the whole thing was often also very, very funny; my well worn original vinyl copy made a lot of people's jaws drop when I played it for them over the years (although I doubt that the thing ever sold enough to pay for the art director's fee for the cover design).

Anyway, and herewith, as promised, the first three tracks.

"Hey Jude" (the first of two versions on the LP, this one done as your basic street-corner doo-wop).

And then Sly and the Family Stone's "Dance to the Music" as nature intended. (That this was actually deemed releasable as a single is, perhaps, the cream of the jest). 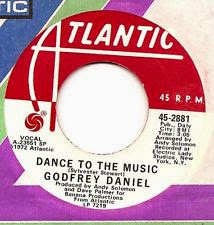 And finally "Purple Haze" like you've never heard it before. Please do not operate heavy machinery after listening to this.

I presumed at the time that Palmer and Solomon were staff producers or engineers at Atlantic (the cover photo is the original Atlantic recording studio, back in the 50s) but I discovered otherwise in 2008, however, when the album was briefly reissued on CD (it is long out of print, alas) and the following clarification was posted over at Amazon.

"The album is only Andy Soloman ('ALL' vocals, and 'All' instruments) and Dave Palmer (Drums). Studio musicians appear on two cuts credited as the Charles Soloman Orchestra. Dave co-produced with Andy, and engineered|mixed as well. The album is mixed in mono, except for the splash cymbal ending on 'Groovin' which is stereo. It was born out of a send up demo Andy made with Dave on a sound-on-sound Sony TC-630 reel-to-reel recorder in 1969. While making The Amboy Dukes last original lineup album 'Marriage' for Polydor records, legendary producer|engineer Eddie Kramer heard the doo-wop version of 'Hey Jude' and totally flipped out. The Atlantic deal soon followed. Dave left the band to become an engineer at Electric Lady Studios with Eddie, and Andy eventually left Ted for a career in commercial music writing. That's the true back story...Dave Palmer is my cousin." -- Ron Christopher

Coming tomorrow: The duo's inimitable takes on songs by Creedence, The Rascals, and The Rolling Stones.

Is anybody out there?

Ha! From former members of the Amboy Dukes!

In the summer of 1972, just before school let out, I made a record run to Aron's Records in Hollywood with a fellow music freak and quasi-albino named Willie. I dubbed him Snowflake after an albino gorilla in National Geographic.

I couldn't find anything good or arousing, so I figured I'd take a chance on some cheapie cut-outs. On that day I scored Nick Drake's "Pink Moon," Pamela Polland's self-titled LP, Randall's Island's "Rock 'N' Roll City", Finnigan & Wood's "Crazed Hipsters", Spooner Oldham's "Pot Luck" Bob Seger's "Smokin' O.P.'s" and the Godfrey Daniel LP. I know this exact data because, at that time, I had a card file for my albums and they were all entered into the "Collection" on the same day.

So, it was a cool album to play for people who knew a little bit about music, ie. record nerds. I still think of it as a novelty because they are all cover tunes. It's sort of in the vein of Run C&W, who did bluegrass versions of Motown standards. But the Godfrey Daniel album is better.

The fact that the guys who did it were in the Amboy Dukes for Journey to the Center of Your Mind and such only adds to its legend.

T'anks for the Mammaries Steve

I rather liked Pamela Polland, now that you mention.

I play this for my friends and students, telling them these were the original versions. It's a lot of fun to see their expressions of bewilderment.

Readers: if you haven't listened to these tracks do so, you'll be glad you did.

Steve: Stop panicking if we don't respond for a few hours to the blog, most of us are at work or getting our lobotomies during the day.

All the more brilliant because of when it was done.

Did you rather like Pamela Polland on a personal level or a musical level?

Gentle Soul was pretty nice. Her uneven solo LP had a few high points. "Out of My Hands" got some FM play around L.A., and deservedly so. It's pretty much a product of the times. You know, hippie chick music, with a touch of gospel. It didn't sell at all and that was pretty much it for her.

Sandy and I saw her live early on, pre-solo album, probably even pre-Mad Dogs & Englishmen. She was playing on a bill with Jackson Browne [also pre-album] in a folk club / coffee house in the San Fernando Valley that I can't remember the name of. Apparently it was short-lived. I remember Taj Mahal was in the small crowd that night. He kinda stood out.

Chi Coltrane came out around the same time with a lot more sauce. I loved the incredible hit. You know:

The surf kinda sucked today, so were gonna pack up and head to Laguna for dinner.

BTW, I think the Godfrey Daniel thing came out in the Spring of 1972 circa April-May, post Dr. John Gumbo and the Roberta Flack / Donny Hathaway LP.

Salut from a most venerable beach bunny,

As done by the Rising Sons (Ry Cooder and Taj Mahal) but more importantly one of the later incarnations of the Byrds.

https://www.youtube.com/watch?v=O_12IyhedQs
This is actually my favorite thing the not original Byrds ever did.

Re: Pamela - The Ash Grove stuff with Cooder is very nice bluesy folk.

Oh yeah, "Tulsa County"! I saw the Rising Sons open for Sam the Sham and the Pharaohs at the Riverside Youth Center in early 1966.They did this tune. But the fave rave dance number was I Got a Little. A couple of local bands also played. I don't remember whether either band was The Bush. Probably not.

The Rising Sons used to play The Trip a lot, while that lasted. They were pretty much the house band. I think they opened for the Byrds there at least once. Probably where Roger heard the tune first.

Your favorote version was by the short-lived John York Byrds. I'm not sure if he still does, but John lived in Claremont for a long period of time. I met him at an art and framing shop out there a few times. He gave me lots of cassettes, and later, CD's, of unreleased sessions he had worked on. A really nice guy. He also cut a solo version of "Tulsa County". And he sang it on tour.

The Ballad of Easy Rider version is just another example of Clarence's prowess and taste, with nice touches by Byron Berline. Not to take away anything from the rest of the band.

She Sang Hymns Out of Tune is playing in the Rover. Have you ever heard any of the Jesse Lee Kincaid solo stuff?

And Toxey French for the production. Nice job of makin' sure Chi kept her undies on.

Re: the Chi Coltrane tune

Along with the late great Larry Knechtel on bass

BTW producer Toxey French is now a registered sex offender for lewd acts with a 14 year old girl. He should have never gone to San Bernardino.

Guys, if that's your trip, just find a girl who's over eighteen that could pass for fourteen.

Vickie Rock waitin' on the garlic bread to go with my unmatched homemade spaghetti. Buon appetito!

Steve, do you have Pamela's version?

I'm not sure this was such an original concept. There was an album called "newies but oldies" by the Royal Teens in 1969 with the same concept and a lot of the same songs. I never heard the album, so maybe it was the same recordings with a different artist credited.

Yep. Good call Voxtron. The LP came out in 1970 as far as I know. Les Paul Jr. produced it. Here's the tunes from the 45 that was lifted from it.

It's not the same artist. But they do cover Proud, Mary, Honky Tonk Women and Hey Jude and seven others.

Too much ink and not enough iron. Beauty is pain.

As is quite evident, the Royal Teens thing is vastly inferior to Godfrey Daniel.