Working on a Building

Sorry to have been such a slacker last week (in terms of posting) but as I hinted, I was helping a certain Shady Dame relocate to her new digs in Forest Hills (just a block away from the Boulevard of Death, if you know what I mean).

Word of advice: If you're ever thinking of moving, don't. God, it sucks. Let's just say that at the moment there isn't an inch of my body that isn't in intense physical pain.

That said, regular and hopefully more entertaining posts resume on the morrow. But in the meantime, I have been informed that apparently I have a son who is playing bass in a very good soul revival band. 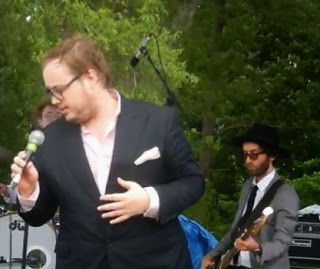 ...and my '90s girlfriend tells me she "doesn't have any children that she knows of." Heh.

Still, I couldn't be more proud. I mean, those guys are really good.
Posted by steve simels at 9:04 AM

I don't get it. I know the album's supposed to be good, but this performance is only worthy of a wedding. St. Paul sure ain't no Cory Wells:)

I sympathize with you on moving. I'd rather have a root canal with no anesthesia while passing a kidney stone and listening to 135 decibel death metal. That was a very nice thing you did.

And I'm sure you'll never do it again. Though it is kind of fun discovering muscles you never knew you had.

I've moved three times in the last seven years. I got tired of fighting with my kids while they got too drunk to handle major appliances. Fuck the stress. By the time the move's done, everybody hates each other and a bunch of stuff is broken.

I now hire these guys. They're the best in the L.A. area. They're worth every centavo. Plus I know one of the guys there.

I really do think they're very good.

Friends whose taste I respect and who've seen them live have raved, actually.

I can see that. I'm only forming an opinion based on the clip. "Try a Little Tenderness" is a great song and I don't think they did it justice on this occasion. The sound quality of the video doesn't help either.

I'm not too crazy about St. Paul's stage presence. The false endings and reprises didn't get me as excited as they should have, either. IMHO these guys come real close to unintended parody on this number.


I love the throwback sound. But their whole bit seems too self conscious and contrived. That's just my first impression. Maybe I'm crazy, maybe it was an off show.

P.S. For your muscle aches Dr. Rock recommends 2 Somas washed down with some Jameson Special Reserve. Put on some tunes or a good movie and chill.

Really great browse, optimistic web site, where by u develop the actual details in todays post? I 've browse the majority of the articles or blog posts with your web site presently, and I very such as your vogue. Thanks a million and please constantly function effectively