Before we go any further: I'll be on hiatus until next Monday, due to an insane schedule (it involves a certain Shady Dame, who I will be assisting in moving to her new digs).

Have no fear, however; NYMary -- the proprietor and creator of this here blog -- will be posting in my stead, and there may even be a special appearance by the redoubtable Kid Charlemagne.

Okay, with that out of the way, I would just like to note (and for the record as it were) that I have recently devoured veteran scribe Joel Selvin's study of the life and work of '60s writer/producer Bert Berns (1929-1967).. 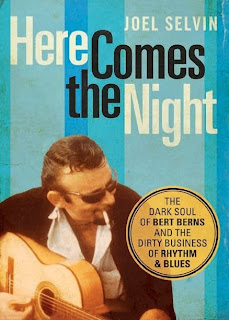 ...and it is, without question, the best rock book I've encountered since Kevin Avery's Paul Nelson bio/anthology. (Or Boys Don't Lie, but that's a given.)

In case you don't know who Berns was, here's just a partial list of the songs he either wrote or produced, or in some cases both.

I mean, sweet Jeebus -- but talk about a work ethic.

Of course, apart from the hits, Berns was also a fascinating example of a certain kind of New York City music biz character from the Golden Age; intensely driven (by a justifiable fear of dying young, due to a childhood bout of rheumatic fever), he was also not above using his Mafia ties to get what he wanted, both from artists and industry moguls (not for nothing was the label he helmed called Bang Records). In any case, Selvin does full justice to both the man's music and to the dark side of the street he lived on. It's an absolutely smashing read; order it over at Amazon HERE

BTW, here's a representative Berns song and production (a little more obscure than some of those listed above, but no less great): Freddie Scott and "Are You Lonely For Me Baby."

Ah, there really were giants in the earth in those days.

See you next week.
Posted by steve simels at 9:56 AM

Yes, he certainly was a musical giant, and died way too young. I've always loved that Freddie Scott tune!

If you like to read the dirt, Josh Alan Friedman's "Tell the Truth Until They Bleed" is another good read. I'd recommend it just for the Lieber & Stoller chapter.

Bert Berns was in the biz when it was interesting and dangerous. Like Vegas used to be. Both lost their edge and personality over theb years.

I love Berns' stuff. Even his duds are a fun listen.

Freddie Scott's version of Are You Lonely For Me Baby has oft been covered but never surpassed. Sounds as if recorded in the Deep South not NYC.

Berns was part of a team though. Arranger Garry Sherman and engineer Brooks Arthur had a lot to do with the sound. But I'm sure that's in the book, which I put on hold at Book Soup. Support your local book stores, please.

Here's an obscure Berns composition done by the great Lulu. It's self-derivative but it rocks. I'm told Jimmy Page was also involved.

Go-go dancing under the spell of electric sangria

A great read indeed, I'm halfway through.
Ace Records have thus far issued two Bert Berns volumes on CD in their excellent songwriter series. These are well worth checking out as well.

Hannes,
Thanks for posting that info on the ACE RECORDS CDs. I was going to do so, but you beat me to it. Incidentally, ACE also has three volumes, in the same series, devoted to various artists performing CAROLE KING & GERRY GOFFIN songs (Goffin died recently at age 75).

If you've got the money, the entire Songwriter Series on ACE is fantastic. There must be about fifty volumes by now. From Serge Gainsbourg to Don Covay to Randy Newman to Dan Penn.

Buy 'em wholesale. I've been doing that since 1990. Just get a seller's permit. It's 25 bucks [in California] and will save you scads if you're a CD junkie.

Back in the 1990's, a quasi-legit CD label out of Japan called A-Side Records began doing comps of certain songwriters. They put out a lot of the Cameo-Parkway stuff before it was legal to do so as well.

The songwriter CD's had some very obscure and hard to find singles. They did volumes of Barry Mann, Carole King, Burt Bacharach, Phil Spector, Tommy Boyce, Jeff Barry - Ellie Greenwich, David Gates, non-Beach Boys Brian Wilson, etc. They were going to do Bert Berns and many others but the label disappeared. Probably because of legal problems.

The two Bert Burns volumes on ACE do not include Lulu's "I'll Come Running," which he wrote and produced along with Mike Leander. So maybe there's another Ace up their aleeve. I hope so.

BTW, those A-Side CD's are really hard to find now and command pretty big bucks on the collector's market. Here's a link to their discography if you're interested:

Still getting over the Ian McLagan show last night,