Theatrical Notes From All Over

Via ROCKCRITICS.COM, interesting and alarming news for those of you in the Los Angeles area:


PLAY ABOUT LESTER BANGS TO HAVE WORLD PREMIERE IN CALIFORNIA
June 6, 2014 By swOOds

Based on the life and words of Lester Bangs, "How to Be a Rock Critic" is by Jessica Blank and Erik Jensen, the husband-and-wife team behind The Exonerated, a play based on interviews with death row inmates. The play will be staged by the Center Theater Group in Culver City, California from June 17-28, 2015.

To write the play, Blank and Jensen went through 50,000 pages of Bangs published and unpublished work, which appeared in Rolling Stone, The Village Voice, Creem and elsewhere. Bangs died of an overdose in 1982 at the age of 33.

A one-man play, Jensen performs as Bangs — who was memorably portrayed by Phillip Seymour Hoffman in "Almost Famous" — with a mustache, a leather jacket and “a little padding”.

Could be a hot one.

Meanwhile, from a party thrown by The Magazine Formerly Known as Stereo Review, here's Lester (kneeling, center, with the hat) and yours truly back in 1976. 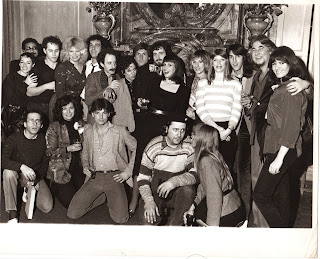 I no longer remember most of the people in that shot (except my then girlfriend -- the perky gal in the center, holding the drink, directly above Lester) but I think you'll have to agree that is perhaps the most spectacularly unflattering photo of me ever seen by sentient mammals.
Posted by steve simels at 10:13 AM

About the time I began subscribing.

The guy on Lester's right is a dead ringer for actor Jan Michel Vincent...

I saw "Exonerated" when it was first in NY --- it was incredible, although I can't remember who was in it the night I saw it (they rotated the cast).

And I want the dress Carol is wearing.

You're right Steve, not a flattering photo. You look like a gape-mouthed auditioner for Freaks and Geeks. Maybe Martin Starr's older brother. No offense. Just teasing. I didn't know your hair was that short in 1976.

The Lester Bangs play once again proves that interesting stuff happens under the radar in Culver City. I wish the play's creators the best of luck and hope that it is well-done.

I had a lot of problems with Almost Famous. That was sanitized, PG, lowest common denominator stuff. Crowe's good at that. I hate pretty much everything he's done, movie wise. Best original screenplay, my ass.

I don't think Lester would have liked it either.

Re the photo: the guy on our right who kind of looks like James Komack, and has a drink in one hand and his arm around a vivacious brunette, looks like he's got a really good buzz going and he knows where to take it.

Speaking of Jan-Michael Vincent, he hit on me once when I was pumping gas at a Shell station in Irvine in the early 1980's. It was around one in the morning.

He was the most arrogant son of a bitch I ever met. His whole attitude was "I know you wanna come home with me. I'm doing you a favor by hitting on you. Fuck, I'm Jan-Michael Vincent. On your knees, unzip and worship me."

Plus he was drunk off his ass and had his paws all over me. Seriously, people have been arrested for less. Luckily, I can take care of myself. I slapped him real hard. He seemed to like it so I gave him a knee to the groin.

I told him he looked and acted like a mannequin and spit on him. He liked it and told me I had spirit. How fucking arrogant of him. He thought of me as a bronc that needed to be broken and he enjoyed the challenge of forcing me to like it.

Coincidentally, a biker guy named Travis that I knew, pulled up on his chopper. He was a member of the Hessians MC that my boyfriend and I did drug deals with.

He put the fear of God into Jan-Michael Vincent and told him to leave "the lady" alone. Jan peeled out of there and drove away very erratically in a car so expensive I couldn't even identify it.

Travis invited me to hang with him and his old lady, but I had a couple of pretty big pythons in the car and wanted to get them home to Sleepy Hollow.

Getting ready for the Queen Mary,

Oh, and who's the girl that Bangs is talking to? She looks like Bailey Quarters from WKRP in Cincinnati.

And Steve, what is that between your legs? On the photo, I mean.

Damn, Vickie. I had the exact same thought about the girl Lester is talking to. Maybe it really is Bailey.

Give me a break Steve, look look fine.

A lot of very attractive women at this party. Carol must of had to keep an eye on you.

Don't be so hard on yourself Steve. The one taken Wed. night is MUCH worse!

I vote Bailey, too.

Steve,
I don't know about most of the other people in the shot (besides you and Lester), but I believe the woman immediately to your left is Paulette Weiss, who succeeded you as Pop Music editor at TMFKASR around early 1977. The gent to her immediate left, kneeling, might be Rick Mitz, who I believe was an Associate Editor. Also, is the gent with the mustache and the long nose standing above Rick (?) possibly Contributing Editor Joel Vance?
I think the date on the photo might be slightly off (I think it may actually be from around "78 or "79) because it looks like, facially, you're in your Elvis Costello period rather than your Alice Cooper period (not a judgment there, merely an observation).

The woman to my left is indeed Paulette (I actually knew that) but the kneeling guy is not Rick Mitz. Neither is the mustache guy Joel Vance.

You're right about the date though -- if my hair's short its got to be later than '76.

If I remember Paulette correctly from her contributions to the magazine, she knew both music and stereo gear. A woman of my own heart. My late, lamented, loved uncle got me into stereo gear. He was a sound tweeker.

With his assistance, I actually built my first pre-amp and amp from a kit. Nowadays, I still tool around with guitars and amplifiers and other electronic devices. That is, when I'm not doing surgery on the vacuum cleaner.

From a female reader's standpoint, Paulette rocked. Was she a bitch? Or no? Be honest.

I think the date on the photo might be slightly off (I think it may actually be from around "78 or "79) because it looks like, facially, you're in your Elvis Costello period rather than your Alice Cooper period (not a judgment there, merely an observation).

I believe that the woman in the middle row slightly left of center wearing a necktie is the publicist Jane Berk.