Some more artifacts glimpsed at the Rock and Roll Hall of Fame over the weekend.

Carl Wilson's 1964 Rickenbacker 12-String -- the guitar he played with the Beach Boys in The T.A.M.I Show. That one literally took my breath away, and not just because I hadn't expected to see it. (You can see Dennis Wilson's 1962 Gretch drum kit, also familiar from the aforementioned film classic, at the bottom of the frame, but I couldn't get a clear shot of it. Sorry.) 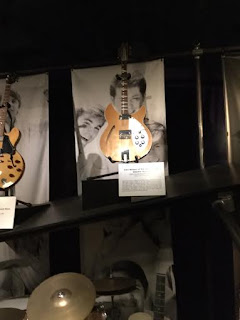 A saxophone played by the great Louis Jordan. Caldonia!!! 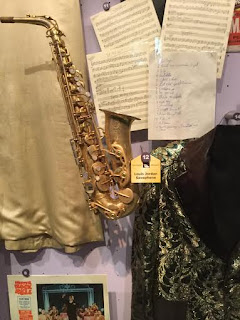 The custom built (in 1968) amp stack (and psychedelically adorned Gibson) of John Cippolina (the criminally underrated guitarist for Quicksilver Messenger Service). I can now totally believe that Cippolina was the loudest guitarist on the San Francisco Scene. 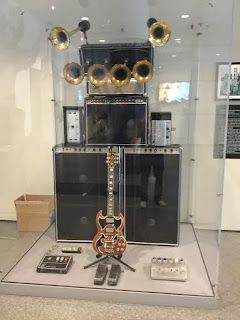 And yes, that's really Ringo's drum kit, the one he played at Shea Stadium in 1965. You can actually walk around it. (In the second shot, you can see the head of a certain Shady Dame of my acquaintance, who was looking at something else). 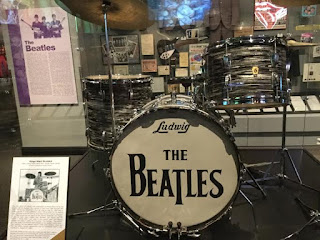 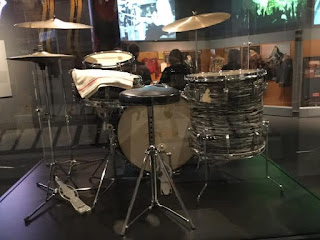 Yes, it really is amazing stuff!

The Rickenbacker that Lennon played at Shea in 1965 is hanging on the wall in the first shot of Ringo's kit. The playlist is still taped to the back.

I just checked, and no -- that's not the Rick Carl played at the TAMI Show. That one was red, pretty much identical to the one George Harrison played at the time. Can't seem to find any photos online of Carl playing the one from the Hall.

Obviously, Carl owned the thing -- just not sure when he used it onstage.

Why would she be looking at something else???

She had already kvelled over the drums.

I was admiring Keith Richards' red sweater, which you can glimpse in the photo.

Truly regret never having seen John Cipollina while in Quicksilver, because his guitar work on HAPPY TRAILS (1969) and especially on WHO DO YOU LOVE and MONA are as representative of a place, time and sound as anything the Dead or the Airplane ever recorded.

Saw them once. Instrumentally, they were by far the most accomplished of the San Francisco bands. And they had great radio ready songs, too, as well as the jam chops.

With the little gold pieces embedded in the volume knobs.

I think that the museum is much better curated than the Hall itself, if that makes sense. The curators of the museum seem to have a better sense of the history of rock music than Wenner and the nominating committee of the HoF.