A Day That Will Live in Infamy

From a press release I got yesterday.

Los Angeles – September 18, 2018– Forty years ago today, each one the four founding members of KISS — Gene Simmons, Paul Stanley, Ace Frehley, and Peter Criss — released their respective solo albums all on the same day to much fanfare, chart success, and platinum sales. And now, four decades later, all four of these pioneering albums are celebrated in KISS: The Solo Albums - 40th Anniversary Collection, a limited-edition 180-gram 4LP box set by Casablanca/UMe that’s earmarked for release on October 19.


Hey, I like vinyl as much as the next guy -- which is to say, hardly at all -- but I reviewed these records forty years ago, and it's one of my favorite things I ever wrote. [A brief note on the dramatis personae: Paulette Weiss was my editor at the mag at the time; (Noel) Coppage and (Joel) Vance were two of our other reviewers.] 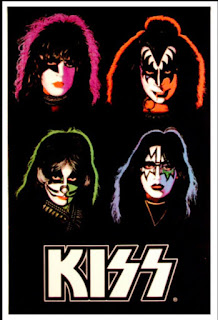 That is pretty wonderful. And about all that needs to be said about this 4-pack.

I'd have taken the Al Martino tix.

OMG! I remember that!

I actually liked one song I heard on the Paul Stanley album, so I foolishly bought the thing. Your assessment was on the money.

This is why I subscribed to Stereo Review back in the 70s.

I liked the band OK for the first couple of albums and then the whole thing turned into a bad cartoon. Never had the "pleasure" of hearing the solo records at the time.

And their still around...kill me now!!!

Good story! The Stanley and Frehley solos were pretty good.

This was one of the most hilarious things I have ever found on the internet. 45 Minutes of Paul Stanley Stage Banter
https://soundcloud.com/christopher-armes/45-minutes-of-paul-stanley

So let me be the voice of the opposition here:

When they came out -- I bought the Paul and Gene records. The Paul record -- is like a long-lost Raspberries album and deserves a reevaluation. It's that good. It puts the Power in Power-Pop. I still play that one at least once a year and it's my go-to "KISS" album after Destroyer and Music From The Elder (sue me -- I like that one -- and I pretty much like anything Bob Ezrin ever produced so that's probably why...)

Gene's album -- is hit and miss. The couple of extremely-Beatlesque songs were (at the time) a revelation to a teenager's ears. The misses, though, are pretty bad swings at the plate. It felt (and still does) frustratingly lazy on the rock songs, though.

I did not buy Peter or Ace's solo albums at the time.

When everything was first remastered on CD, I finally bought Ace's album. It is all kinds of awesome and I kicked myself in the pants for ignoring it for decades. To me, it's the "All Things Must Pass" KISS solo album -- a bunch of great songs he must have stockpiled for years or something. Never duplicated after that, though.

Peter's album, though, I listened to the remaster first and didn't like anything about it. I tried again a few years ago and haven't changed my mind on it.

What Shriner said. Thanks for speaking up. Still sound good on vinyl. :)

True confession: I'm not a hundred percent sure, but it's possible that I only gave those albums a cursory listen back in the day because a) I really disliked everything about KISS and b) because I had already written the review in my head before the albums actually arrived at my office.

I know I sorta listened to them, but it may have been secondary to my intended snark.

I remember that review very well, thanks for sharing!

Not a bad Chandler pastiche, but I still prefer your takedown of Emerson, Lake, and Palmer “In Concert”. Came out around the same time I think - sometime in 1979.

Not a bad Chandler pastiche, but I still prefer your takedown of Emerson, Lake, and Palmer “In Concert”. Came out around the same time I think - sometime in 1979.

Written in the style of H.P. Lovecraft. Here it is:

Thanks BG! That was before I found this blog, so much appreciated!