The Magic of the Theatre

So as I may have mentioned, a few weeks ago a certain Shady Dame and I bit the bullet and went to see Beautiful: The Carole King Musical. 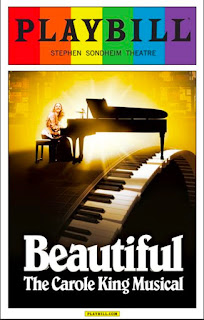 As a rule, I'm not a big fan of jukebox shows (although I will confess to rather enjoying Clint's film version of Jersey Boys). On the other hand, like all right-thinking Americans, I'm a huge fan of Goffin-King's songwriting; I mean, if they had been responsible for nothing more than "Porpoise Song" for The Monkees, they would deserve immortality. Plus, I was pleased to discover that the show is as much the Barry Mann/Cynthia Weill story as it is Goffin and King's, and I was kinda curious about seeing Maria Benoist, aka TV's Supergirl, as Carole.

Unfortunately, turned out she had left the show a week before the performance we saw. Aaaarrrggghhhh.

In any case, Beautiful was at best...wildly uneven. Forget the book, which was shall we say historically dubious (the words Phil and Spector were never uttered) although on balance I could live with that. And on the plus side, the musical performances that are supposed to be King solo, primarily from the Tapestry-era (in the case of the show we saw, performed by Broadway singer/actress Abby Mueller) were right on the money.

On the other hand, the performances that channeled other acts that had 60s hits with Goffin-King songs (The Shirelles, The Chiffons, The Cookies, et al) were uniformly ghastly -- pure Vegas bullshit, soullessly sung and with some of the worst choreography I've ever seen.

Okay, all that said -- there are two Goffin-King songs I dearly love that weren't in the show, and I thought I'd share them now.

So, please enjoy -- from 1963 -- the ineffable Skeeter Davis and the cute as a bug's ear "I Can't Stay Mad at You." Perhaps the greatest teen-pop/sort of doo-wop hit by a stone country singer ever.

And from 1964, please enjoy The Tokens and "He's in Town." Perhaps the greatest proto-Bruce Springsteen slice of urban romanticism ever recorded by a sort of teen doo-wop group.

I'm not saying the inclusion of those two songs in Beautiful would have made it a better show, but on the other hand -- could be, could be.

I don't think I every heard these Goffin-King songs before.

It sounds like G/K and or The Tokens had The Four Seasons in mind with the arrangement of "He's in Town", a G/K song that really grabbed me.

Definitely had the Four Seasons in mind, Capt. Al, and possibly this “In Town”hit written by Bob Gaudio and arranged by Bob Crewe: https://m.youtube.com/watch?v=o8SIaoae5Q0.