So I've told part of this story before, but hang on -- there's a new epilogue that justifies my recycling it.

Okay, the short version. Back in March of 1981, a think piece I had written about John and Yoko's Double Fantasy album appeared in The Magazine Formerly Known as Stereo Review. This was the most difficult thing I ever wrote, for obvious reasons, so I was actually rather pleased to find upon re-reading it a few years ago that the only thing that embarrassed me about it were some dire predictions that (mercifully) didn't come true.

In any case, a few weeks after the piece originally appeared, I got a very nice hand-written note from a woman (the now famous Freda Kelly) who had worked as a personal assistant to Brian Epstein at the height of Beatlemania. She told me that of all the reviews of the album she had seen, mine was the one that most resonated for her. That meant a lot to me, also for obvious reasons, but because I'm an idiot, I didn't save her letter.

Cut to earlier this year, when a certain Shady Dame and I were about to go to Liverpool and take a Beatles tour (which we did, and I highly recommend it. You can find more info about it over HERE). And we were in touch with a woman who runs another of those Fabs tours, the special guest of which was the aforementioned Freda, who you could meet. As it turned out, we couldn't work it out logistically, but we asked the tour lady if she could give Freda a printed copy of the Double Fantasy review and have her autograph it. When we got to town, she (the tour lady) e-mailed me and said for whatever reason she wasn't able to get Freda the print-out, but she had told her the story and said that she (Freda) would leave something personal for me behind the desk at The Hard Days Night Hotel (yes, there is such an establishment).

Anyhowever, on the afternoon we were leaving town, we stopped at said hotel to pick up the package.

Which turned out to be a photo of the Fabs back in the day... 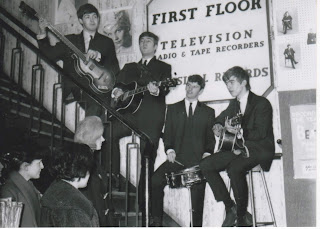 ...with a little handwritten note from Freda on the back. 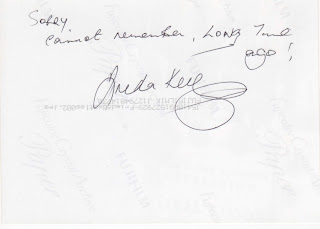 If you can't read it, it says "Sorry. Cannot remember. Long time ago." 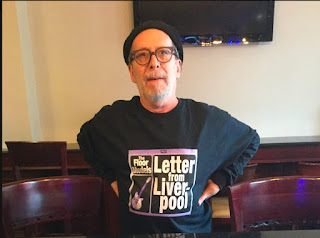 quite wonderful. I seem to like the album much more than you (Watching the Wheels is heartbreakingly good realization of the value of time (and the Aloe Blac version on Jl 75th birthday special was really great); Cleanup Time, (Just Like) Starting over is fine song.