A Heartbreaking Work of Staggering Genius

So for a variety of reasons, I have been listening -- obsessively of late -- to one of the great unheralded albums of our lifetime.

Here's my critique of it from the Magazine Formerly Known as STEREO REVIEW. 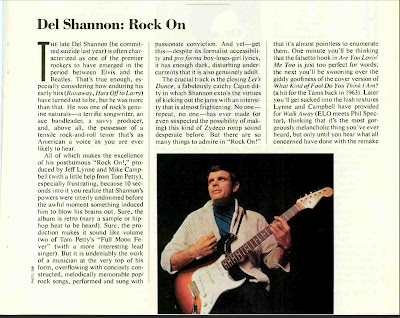 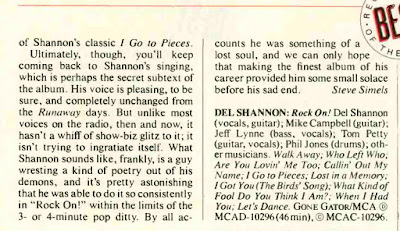 In any event, I posted that on Facebook the other day and a friend sent me the link to this clip of Shannon on the Letterman show in 1987.

I think any objective person would have to concede that's one of the greatest rock-and-roll performances in the history of the music.

I mean seriously -- when Shannon did that, he had already performed "Runaway" more times than Judy Garland had done "Over the Rainbow," and yet he's absolutely not phoning it in.

[h/t Trademark Dave]
Posted by steve simels at 6:15 AM

That's a great clip and, yes, Rock On! was really good. The desperation in Del's vocals is perfect for these desperate times.

Thanks for sharing that. That Late Night Letterman band was pretty good too...

He was just great, and could have gone on. He was ready to be a Wilbury.

Right you are, Pete. I'd also add Frankie Valli, Brian Wilson, and Jay Siegel of the Tokens.

This is a wonderful clip of a performance I well remember.

That's a killer performance of one of the great rock & roll songs. Del's performance is strong, and the band are enjoying playing a classic with him.

Thanks for reminding me about Rock On.