In case you missed it, there was an absolutely fascinating interview by historian Douglas Brinkley with the Hibbing Minstrel in the New York Times over the weekend.

BOB DYLAN HAS A LOT ON HIS MIND 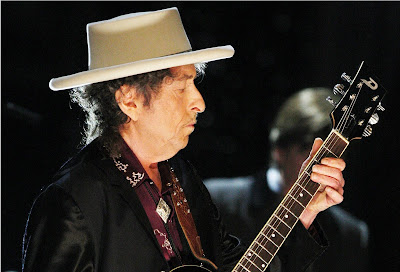 A few years ago, sitting beneath shade trees in Saratoga Springs, N.Y., I had a two-hour discussion with Bob Dylan that touched on Malcolm X, the French Revolution, Franklin Roosevelt and World War II. At one juncture, he asked me what I knew about the Sand Creek Massacre of 1864. When I answered, “Not enough,” he got up from his folding chair, climbed into his tour bus, and came back five minutes later with photocopies describing how U.S. troops had butchered hundreds of peaceful Cheyenne and Arapahoe in southeastern Colorado.

Given the nature of our relationship, I felt comfortable reaching out to him in April after, in the midst of the coronavirus crisis, he unexpectedly released his epic, 17-minute song “Murder Most Foul,” about the Kennedy assassination. Even though he hadn’t done a major interview outside of his own website since winning the Nobel Prize in Literature in 2016, he agreed to a phone chat from his Malibu home, which turned out to be his only interview before next Friday’s release of “Rough and Rowdy Ways,” his first album of original songs since “Tempest” in 2012...

You can, and should, read the rest of it over at the Times HERE.

I should add that, based on the two songs from the album that have already been released, this is going to be a major event. I highly recommend pre-ordering it over at Amazon HERE.

And in the NYT interview, Dylan was considerably less elliptical than he has been in the past. Three or four dreadful albums of standards and one of Dylan singing Christmas songs will do that to you.

I for one hope that Rough And Rowdy Ways is another career highlight for the ol' boy.

Does his ability to avoid what I call the "My Ding-a-Ling" factor make him a greater artist than Chuck Berry? The distinction is meaningless. No one great artist is "greater" than another. Dylan's synthesis of Folk music with Beat poetry, Berry's synthesis of R&B with Nashville songwriting. Perhaps the one has more room for growth, but that's about it.

CONTRACT HACKERS: WE CONNECT YOU WITH PROFESSIONAL HACKERS FOR HIRE!!
Have you been scammed on Facebook or any other platform and you want to know who is behind the computer or phone? Read this brief article!

We are a growing hack company that connects you with well known professional hackers for hire. We have worked with different well known companies like Yahoo, Snapchat, Binance, YouTube, Google and so many more to mention. We do this as a side hustle and not for fun.

The purpose of this team is to manage clients queries by using the RIGHT TOOLS we need to delight our clients without compromising on quality in order not to make them feel challenged to gain our assistance!

Our team doesn't stop at asking mere questions. We take your feedback, and work on every detailed complaints you may have.
Be it

And any other issue can be resolved by us without stress. Chat with us. The amazing thing is that hundreds of clients' issues are resolved within hours every single day! TRY US TODAY! WE PROOF OURSELVES BEYOND EVERY DOUBTS.

For the fastest resolution to any issue, please contact our Support Center prior to submitting a request. We remain anonymous to you for risk reasons.