Fun With Downloads: Once Were Hippies

From Spring of 1970, please enjoy the putatively cynical Nick Lowe, with the rest of Brinsley Schwarz, and (from their eponymous debut album) the quite seraphically lovely prog-meets-powerpop ditty "Mayfly." 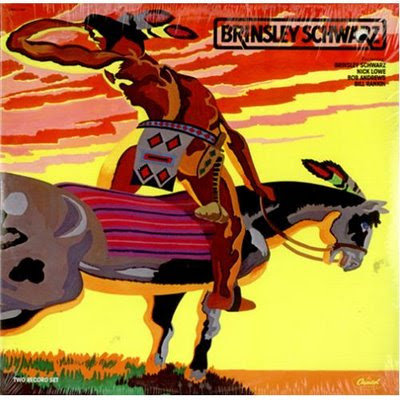 You can download it HERE. As usual, if the authorization has expired by the time you get to it, just e-mail me and I'll shoot you the mp3.

Very few people in the States were aware of this record at the time. Me, I was on the Capitol Records mailing list in college, so when it arrived (along with I believe ten other albums, none of which I can recall at the moment) I listened out of idle curiosity -- with a name like that, was this a Jewish band? -- and was immediately taken with it. To me it sounded, musically, like a really smart amalgam of the better American hippie groups of the period (CSN, the Dead, the Band) only with vastly superior production gloss, and I wound up listening to it obsessively for quite a while. I had, however, absolutely no inkling that it was a much-maligned (in England) artifact of one of the greatest press hype disasters in the history of pop music (Wiki the band if you don't know the story) and given its overall pastoral tone I was frankly amazed, years later, when Lowe turned up as the Pure Pop for Now People wiseguy we all know and love to this day.

In any case, I really dig just about everything about this track, but as usual it's the Brinsleys keyboard player, the great Bob Andrews, who really puts it over the top for me. No kidding -- if there's more lyrically lovely Hammond organ work on record anywhere, I for one haven't heard it.
Posted by steve simels at 12:02 AM

Brinsley Schwarz have been sadly neglected in my record collection, though I have a good deal of Mr. Lowe's later work. Thanks for sharing a great tune. Awesome guitar work too.

Yup, that very record showed up sometime in 1978 at the college radio station. I was partial to "Rock and Roll Women" and "Country Girl".

Didn't know about the Brinsley Schwarz Hype. So - they got around their visa problem by flying into Canada and entering the US in a "light aircraft," then playing their big show with rented equipment. Sounds enjoyable.

Wiki also notes that "they were heavily influenced by Eggs over Easy". Well, who wasn't?

Noam -- that record was re-released in 1978 because of Nick's sudden punk era celebrity.

And yes, Country Girl and Rock and Roll Women are swell too...

The things you learn here at Powerpop. Although I was aware of the "old" part.

I don't remember how I acquired a copy of "Despite It All" in the early 70's, maybe a used record store in New Haven. Never forgot them and felt bitter and resentful when the Eagles rose to fame since the Brinsleys were sooooo much better.

Somehow I thought I would run into them if I went into enough pubs or maybe just the right pub during a 3 month period in 1977 while studying in London. Right. That didn't happen but I did wander into the belly of the most exciting music in a long time, a flipping welcome break from the crap I had been hearing in CA the preceeding year, though that was fine if filtered through lots of weed.

I bought a double album repackaging of two BS records back in the day. I need to rip those onto the computer as they are great.